Subscribe
Cost reductions may stabilise the financial positions of CRCs, but could limit innovation and compromise service delivery.

The risks of TR

This is the 6th and final post in a series on the National Audit Office’s first official assessment of the new probation system introduced by the MoJ’s Transforming Rehabilitation reforms (summarised here). It focuses on Part Four of the NAO report which seeks to identify the risks to the new system going forwards.

The contracts signed with the new owners of community rehabilitation companies (CRCs) commit them to achieving economies and efficiencies sufficient to fund the costs of expanded services, including ‘Through the Gate’ and supervision of offenders with short sentences. Bidders offered cost savings ranging from nil to more than 20% relative to the MoJ’s maximum annual payments as the NAO’s anonymised graphic shows below (the bottom 8 rows relate to the successful bidders): 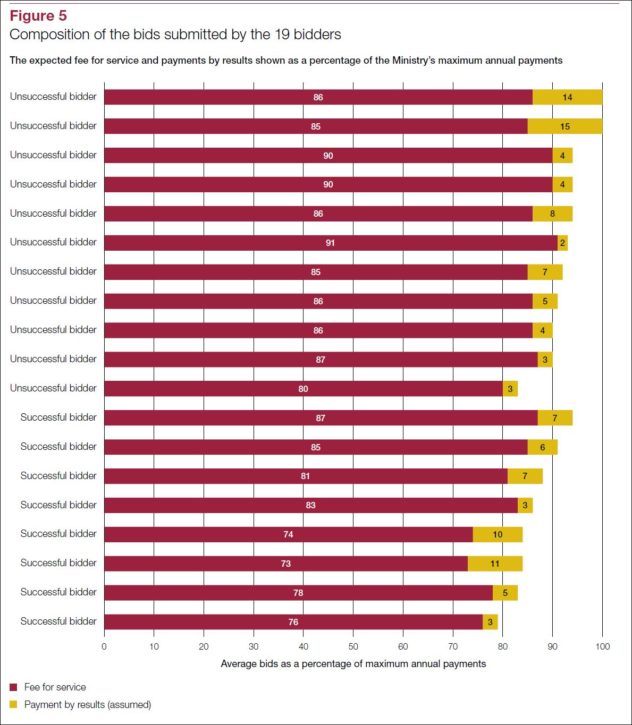 Each transformation programme depends on significant privately financed investment, mainly in the first two years of the seven-year contracts in areas such as:

The NAO sets out how CRCs now face commercial and contractual pressures to deliver these changes. The extent and pace of CRCs’ transformation plans have become more uncertain because their case volumes are much lower than planned during bidding. Volumes are down between 6% and 36% against the mid-point agreed in the contracts. The 3 main reasons for reduced volumes appear to be:

Obviously, this likely significant reduction in income has had a big impact on CRCs. The NAO identified a number of issues in the 4 CRC areas where they did fieldwork:

The NAO note that other options for providers include taking reduced profits and making further changes to offender supervision.

The NAO identifies significant additional risks from this situation and highlights the challenges for the MoJ:

Cost reductions may stabilise the financial positions of CRCs, but could limit innovation and compromise service delivery. They could also trigger financial penalties or, potentially, termination of contracts. Such scenarios would test the Ministry’s contract management capability, particularly its operational assurance of the quality of rehabilitation services for offenders.

The NAO discusses the future of the NPS rather briefly but does seem concerned about its prospects. It summarises the NPS E3 (effective, efficient and excellent) blueprint for the future which covers six areas of core service, including court delivery and community supervision. The NPS has surveyed staff views on the blueprint and each NPS region also has its own ‘champion’ to communicate ongoing transformation to staff; the NAO highlights its concerns:

Perhaps the most important element of Transforming Rehabilitation (and the one with the most potential for good) was the extension of mandatory probation supervision to all short term prisoners (those serving more than 1 day and less than one year) for the first time. The NAO found insufficient information to make any judgement on this recent element of TR (which started on 1 May 2015). It did however highlight initial problems “associated with ambitious timescales”:

Some providers encountered challenges in accessing prisons and mobilising their resettlement suppliers. NOMS’ assurance checks found that providers initially focused too much on whether offenders complete the process, which is one of the CRC service levels, rather than the quality of their resettlement plans.

So where does this NAO report leave us in assessing the performance of the new probation system?

There has clearly been considerable confusion and a large number of difficulties in implementing the new system. Perhaps slightly surprisingly, there have been just as many problems for the remaining public NPS as the new private CRCs.

While it is understandable that the NAO has reported now – such a large change obviously merits proper public scrutiny – a full report at the end of this year might have been preferable when difficulties could no longer be attributed to teething problems and we could get a clearer sense of whether positive change will emerge or whether we are at the relatively early stages of a very large car crash.

The NAO has, however, identified a number of very serious risks and it’s hard to escape the feeling that probation is currently teetering rather precariously on the edge of what could be a very serious collapse in terms of rehabilitating offenders and keeping the public safe.

In the near future we will be particularly reliant on the probation inspectorate to get an accurate picture of the direction of travel of both the NPS and CRCs.