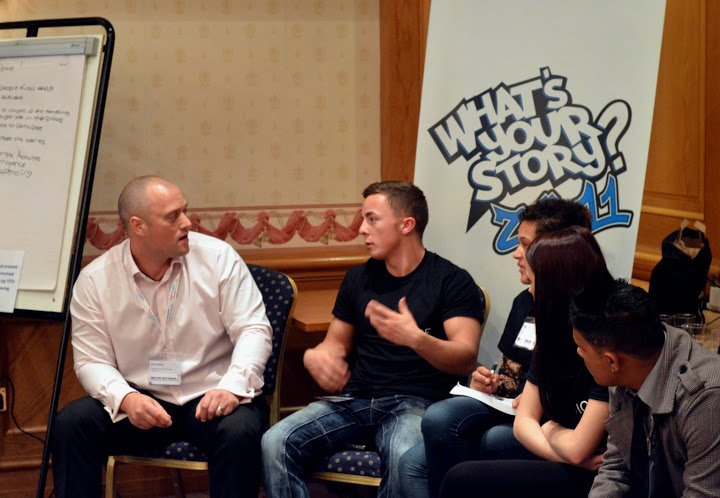 User Voice’s mission is to reduce offending; its work is led and delivered by ex-offenders who consistently foster dialogue between users and providers of services within the criminal justice system. They seek to provide ways:

that enable unheard voices; to make a difference, to urge policy-makers and people with power who make decisions to listen.

The report is based on five focus groups with 45 service users in four CRC areas in different parts of the country. Several of these service users were given training in basic research methods and conducted peer research, administering a short survey about TR to a further 251 service users.

The majority of survey participants were on licence (n = 84), a suspended sentence (n = 65) or a community order (n = 61), although other and multiple supervision types were present. All participants were asked whether they were supervised by the NPS or CRCs. Interestingly, well over one-third (n = 105) were unsure of, or did not provide information on, which service managed their order.

It appears that most respondents were supervised by CRCs but the findings are not separated into CRC/NPS because only 34 participants were definitely supervised by the NPS.

The report merely presents the findings from these service user consultations and does not interpret them.

This is one of the largest studies of service user views of probation and merits careful reading. It’s not possible to do it justice in this post which will focus on service users’ experience of changes since the implementation of TR. However, it is worth noting that despite a number of criticisms, 46.7% survey participants rated their relationship with their supervising officer as good, 45.5% rated it okay and just 7.8% as not good.

Service users were asked whether they felt there had been any changes since the Transforming Rehabilitation agenda had been operationalised. More than three-quarters (77%) survey participants said they had not noticed any change in the overall service they personally received and this was also the case in the focus groups, where the general feeling was that there is going to be change, but it’s not happened yet.

The table reproduced below outlines survey participants’ views of whether specific aspects of probation have changed since Transforming Rehabilitation. Most respondents answered that they had seen no change in nine out of ten areas, although there were some clear differences, particularly with ‘help with housing’, which appeared to have deteriorated for many. 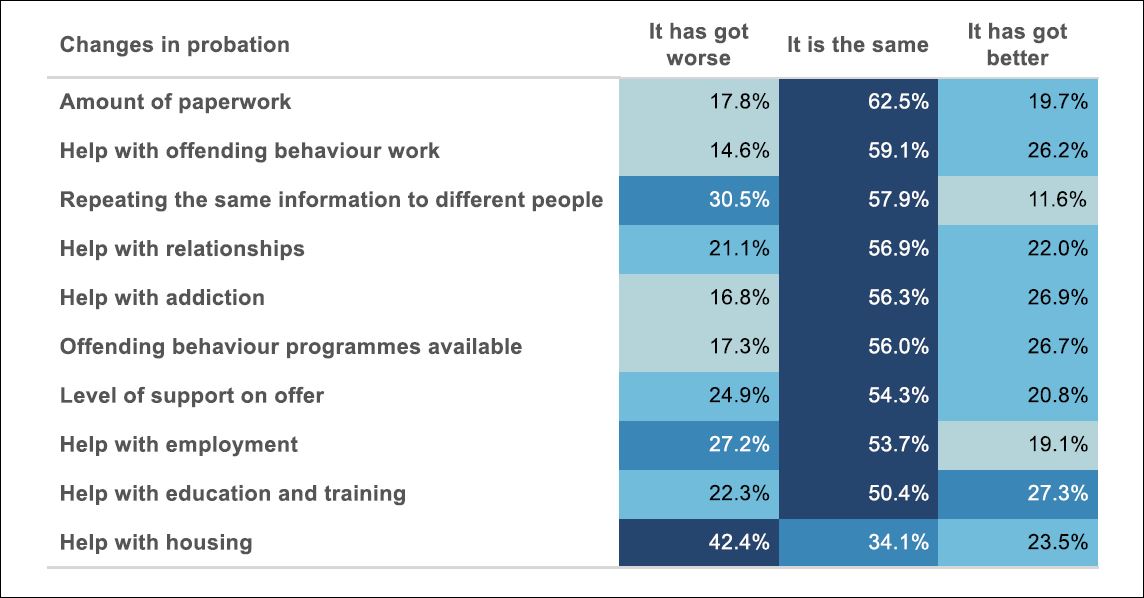 It appears that there have been more resources helping service users tackling their offending behaviour and direct criminogenic needs such as help with drug or alcohol problems but less help with key external causes of offending such as housing and employment. The lack of appropriate accommodation was a major theme in the research.

Survey respondents were given the space to freely record what they thought the impact of Transforming Rehabilitation had been, without any predetermined answers. The most popular answer — voice by almost a third of participants — focused on the negative impact of changing their probation officer.

However, the next most common answer (29%) was related to the impact of the change on staff, with respondents using terms such as “more stressed”, “miserable”, “deflated” to describe their probation officers. The report includes a number of verbatim quotes:

I felt like an agony aunt to my PO [probation officer] as she may lose her job with the changes.

The uncertainty of staffing has given a lack of morale amongst staff. This has affected their work and service users have suffered as a result.

Seen a change in last 12 months and staff are going so will see another change.

Seen more and more being sentenced to probation from courts … not enough staff to compensate.

The service users who took part in this consultation provided feedback on the differences they experienced as a consequence of the Transforming Rehabilitation agenda. A range of topics were covered regarding their experience of working with probation at the moment and any changes they had noticed in the last 12 months. The report summarises its three main findings

Looking for a key leadership role in criminal justice?

Circles UK is looking for a new Chief Executive to lead their pioneering work with sex offenders to keep children safe.