This is the 4th post in a series on the National Audit Office’s first official assessment of the new probation system introduced by the MoJ’s Transforming Rehabilitation reforms (summarised here). It focuses on Part Two of the NAO report which examines the current performance of both the National Probation Service (NPS) and the 21 new Community Rehabilitation Companies (CRCs).

Data on reoffending will not emerge until late 2017 (allowing a year after supervision for offenders to reoffend, and a further six months for offences to be proven in court). Therefore the NAO assessed performance on service levels which focus on the timeliness, completion and quality of delivery of services to offenders.

The NAO acknowledged that assessing performance was not easy because of limitations in both the availability and quality of data.

For the NPS robust data exists for only 18 of the 25 service levels with NPS managers expressing limited confidence in some of the data due to “quality issues caused by laborious and dated case and offender management systems”.

For the CRCs, data varied considerably between areas/providers with robust data available for 19 out of the 24 service levels and assurance metrics.

The NPS is performing at or above target levels in seven of these 18 service levels — although performance varies significantly across the seven NPS regions. NOMS service level agreements require that NPS achieves all targets by April 2017.

Overall, by December 2015, CRCs were meeting targets for seven of the 19 measures where NOMs considers robust data were available. Again, performance varies significantly across CRCs with the MoJ contracts requiring that CRCs achieve all targets by February 2017.

Both the NPS and the CRCs are set a 75% completion target for community orders and suspended sentence orders. National performance is 70% for NPS and 80% for CRCs, with NPS and CRC performance relatively stable. However, there is wide variation across NPS regions (12% range) and different CRCs (15% range): 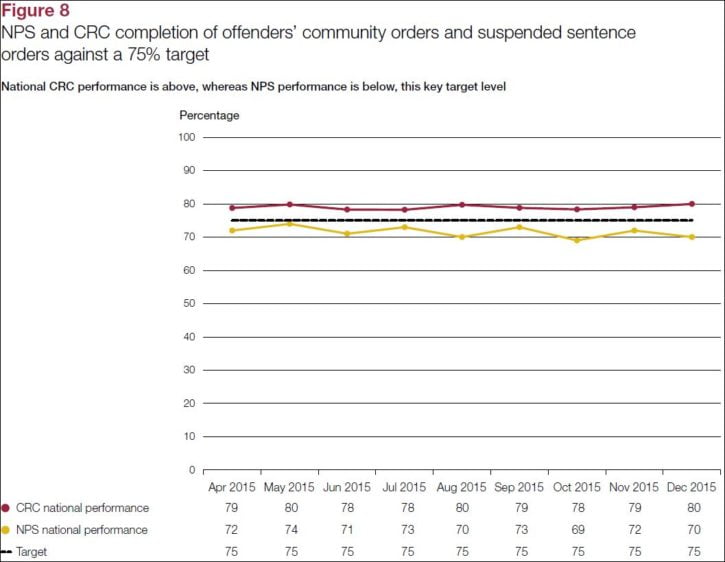 Performance remains consistently lower than target levels in the allocation of unpaid work requirements for both the NPS and CRCs — unpaid work was also the subject of a very critical report by the Probation Inspectorate in January 2016.

The NAO’s prime purpose is to be the watchdog for value for public money; so unsurprisingly they scrutinised contract management arrangemetns closely.

The NAO questions whether this level of scrutinty is sustainable since the MoJ needs to achieve savings in its administrative budget of 50% by and overall resource savings of 15% by 2019-20.

The NAO assessed the level of contract management for the NPS as “weak”:

There is not sufficient detail in the NAO report to make a clear assessment of how well the NPS and CRCs are currently performing. The picture is clearly mixed with a number of areas of under-performance, albeit data were collected only for the first 9 months of the new contracts when performance can be expected to be low.

In reality, we are not likely to be able to form a reliable picture of performance until the first set of re-offending figures are released in late 2017 — and even these will relate to the early months of operation.

In the meantime, we must look to the probation inspectorate to get a sense of whether performance is improving or deteriorating.