I was an early convert to Twitter inasmuch that I registered on it in the early days (when even Stephen Fry had just a few hundred followers) but I remained inactive, and uninterested, for some years.

It was the start ofNapo’s Centenary in 2012 which prompted me to get involved and it would be fair to say that I became hooked almost immediately.

I have been blogging since being electedNapo’s General Secretary in 2008. It is an important window on the wider world of Probation and Family Justice but it rarely created much interaction or argument.

Whilst I received regular feedback from my dear old Mum and Dad (most of it critical as our politics are very different!) it did, at times, feel as if I was talking to myself.

Twitter has transformed that experience and a real conversation has started as I use it to promote my blog and other views and ideas.

Compared to a blog, Twitter is light on its feet, immediate and infectious.

The disadvantage of its immediacy is that you can miss the discussion boat quite easily if you are not in the right place at the right time. But there is always something new and its range of communication options – retweeting, @naming, links, direct messages – make for a creative and stimulating environment.

There are challenges to using Twitter effectively and efficiently. I don’t have the common disclaimer about personal views etc as I cannot separate my tweets from my role asNapo’s General Secretary. I do have personal exchanges (apologies to those who loathe sport) and will occasionally make an attempt at a joke.

Twitter can trick you into quick and instinctive responses so I have tried to ensure some reflection ahead of tapping on the keyboard or phone – I have censored myself on more than one occasion!

To achieve balance it’s necessary to constantly adjust my position to try to avoid becoming either too po-faced and bland or flippant and superficial.

But this is a positive tension and has helped keep my engagement with Twitter, from my perspective, fresh and lively.

I am also pleased that Napo has now set up an official account @Napo_News which provides a communication point for more formal announcements.

I doubt that my reasons for using Twitter are either original or differ much from other users.

It is a tremendous source of information, news and ideas.

There is the opportunity to build support and agreement or (less frequently in my experience) exchange differences of opinion.

My focus, understandably, tends to be on Probation, Family Courts, the labour movement and politics.

The speed of Twitter can be breathtaking at times and it is an exhilarating experience to have a message re-tweeted across the Twittersphere as Napo’s promotion of Early Day Motion 622 in support of Probation was recently.

Using the hashtag # is also highly effective as we found when running our professional conference in York last July and the recent centenary AGM (#NapoAGM12).

During a visit to Colombia earlier this year with @JFColombia Twitter kept me connected to the wider world.

The response to my tweets about the oppression of trade unionists and human rights activists there was moving and encouraging. 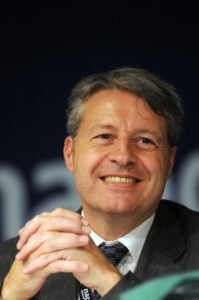 In my case, it is more than 12 years since I was a Probation practitioner so those I follow who talk about the day to day work give me a fantastic insight into their experience and reinforce the importance of supporting, developing and defending their work.

Despite the constraints I impose on myself, I am in a position to make more overtly political comments compared to many in the Probation Service and Cafcass.

I am aware of the anxiety and uncertainty about the future colleagues feel working at all levels in the public sector.

Having the opportunity to highlight these concerns and challenge the ideology of Government and Ministers is vital.

I guess that Twitter in its utilitarian and flexible design becomes whatever they want it to be for individual tweeters.

In my case it supports Napo’s commitment to unity and solidarity and pursuit of equality and fairness.

This is the 27th post in the criminal justice/legal Why I tweet series. Read the others here.

Next Week: Simon Cole (@ccLeicsPolice) Chief Constable of Leicestershire, on why he tweets.