Drugs remains such a politically sensitive issue that an honest review which highlights successes and failures with the same prominence seems very unlikely, irrespective of which political parties are in power. Until we can have an open and honest debate about drugs in this country, it will be difficult for us to have a truly effective drug strategy.

The government recently (26 February 2015) published its third annual review of the 2010 Drug Strategy, entitled “A balanced approach”. Like all such governmental reviews, it focuses on what has been achieved rather than providing an impartial impact evaluation.

The review is structured on the three key themes of the strategy:

I briefly summarise the main points under each of these three sections below.

As always, the Reducing demand section is 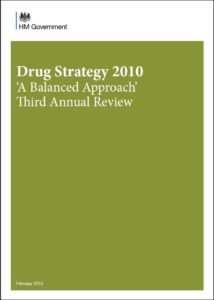 the most controversial for those who work in the drugs field. The principal aim of “creating an environment where the vast majority who have never taken drugs continue to resist any pressure to do so” seems to clash with many of our real-life experiences which suggest that it is actually a majority of people who use drugs at some point in their lives.

The government claims a number of successes and highlights several achievements in this area including the “Rise Above” online resource and social movement for young people and the development of Public Health England’s role in sharing evidence around health prevention. This contrasts markedly with the ACMD report published the day before this review which highlighted a general lack of knowledge about which forms of drug prevention are effective.

I remain incapable of reading anything about supply reduction without remembering the words of John Grieve who used to be in charge of the Met Police’s drug strategy and who would start any presentation about tackling drug importation and dealing by reminding his audience that East Berlin in the 1960s was surrounded by the wall and four occupying armies and still had a raging heroin problem.

As usual, this section is full of statistics such as the 193,999 drug seizures made in England and Wales by the police and Border Force and the 213 tonnes of drugs seized by the National Crime Agency. Of course, we have no idea what proportion of the total this constitutes, although we can be reasonably confident that it is significantly less than 1%.

Much of the rest of this section looks at how to tackle Novel Psychoactive Substances (more commonly known as NPS or legal highs) although, interestingly, it makes only one mention of tackling the sale of drugs online – apparently by getting Internet providers to close UK-based websites which contravene the Misuse of Drugs Act.

It is hard to read the Building Recovery section without thinking of the large reduction in public expenditure which has meant that 60% of community drug treatment services are facing cuts and access to a wide range of services key to recovery, particularly mental health, is becoming increasingly problematic.

Nonetheless, the launch of the Health Premium Incentive Scheme which offers financial incentives to local authorities where progress is made in improving substance misuse outcomes is worth mentioning. However, the whole 2015/16 incentive budget is only £5 million.

Perhaps particularly interesting to readers of this blog is that number one in the list of key priorities for the year ahead is the independent evaluation of the Payment by Results drug and alcohol recovery pilots. Publication is scheduled for March and it’s to be hoped that the election and period of political purdah does not delay this. PbR is becoming increasingly popular with commissioners of drug treatment, although the interim evaluation of the PbR pilot contained a number of substantial misgivings, to put it mildly.

There is an inevitable disconnect between any government’s claim to success in a given sector and the experience of those working closer to the coalface. Nevertheless, it would be unfair not to mention the long-term downward trend in drug use among adults over the last decade including a steady fall in the number of heroin and crack cocaine users.

Treatment waiting times are as good as they’ve ever been and the treatment data suggest that more people are recovering from their dependency now than four years ago.

This review confidently attributes this good news to the effectiveness of the drug strategy.

However, the signs remain contradictory with drug-related deaths increasing again last year and more young people saying that they were using drugs.

It’s no surprise that these two facts aren’t mentioned in the annual review.

Drugs remains such a politically sensitive issue that an honest review which highlights successes and failures with the same prominence seems very unlikely, irrespective of which political parties are in power.

Until we can have an open and honest debate about drugs in this country, it will be difficult for us to have a truly effective drug strategy.