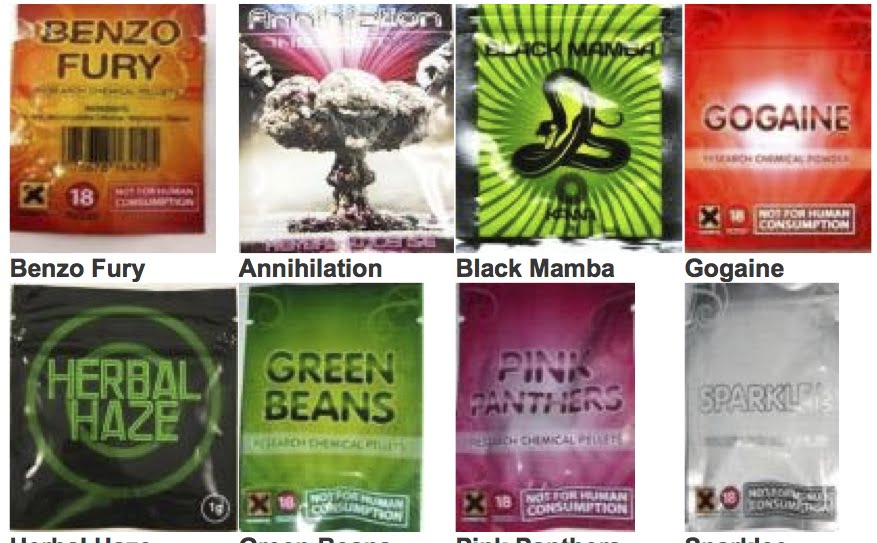 The Global Drug Survey becomes more valuable every year; this year over 100,000 people completed the survey. The survey is very different from research such as the Crime Survey for England and Wales because it is typically completed by regular, mainly recreational, drug users. The findings make fascinating reading and I recommend that you find time for a browse.

Global trends in drug use

The Global Drug Survey becomes more valuable every year; this year over 100,000 people completed the survey.

The survey is very different from research such as the Crime Survey for England and Wales because it is typically completed by regular, mainly recreational, drug users.

The findings make fascinating reading and I recommend that you find time for a browse.

But, in the meantime, here are 10 facts that I hope you’ll find as interesting as I did:

Ireland had the highest rate of drinkers at risk of dependence (AUDIT score of 20 or more) and Irish people reported needing to drink more alcohol than almost any other country to get as drunk as they would want to be. This didn’t put them off though as they also had the highest rates of getting more drunk more often than they wanted to.

2. Drug users in the USA  (then the UK) most likely to smoke 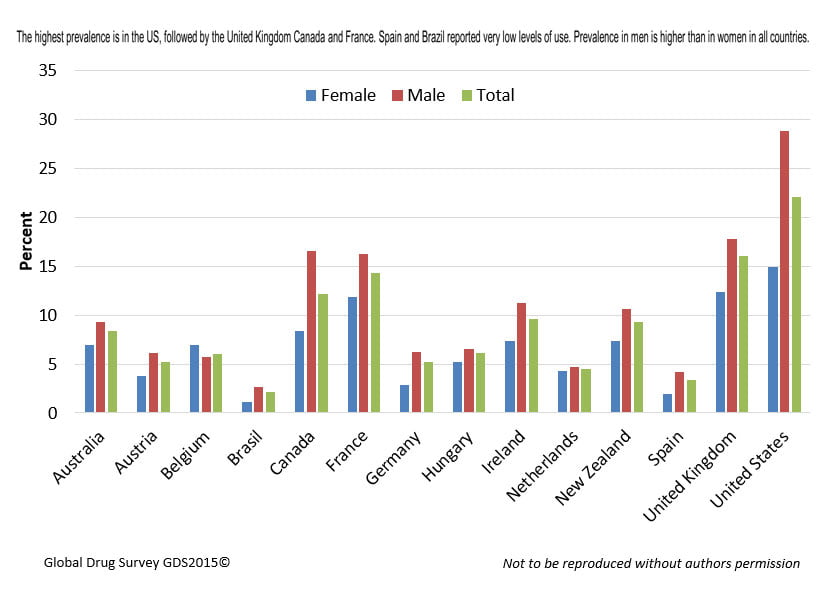 3. All forms of cannabis can land you in A&E

High potency herbal cannabis dominates the world market and carries the greatest risk of harms but other types can also result in a trip to the emergency department, something that happened to 434 GDS respondents in the previous 12 months: 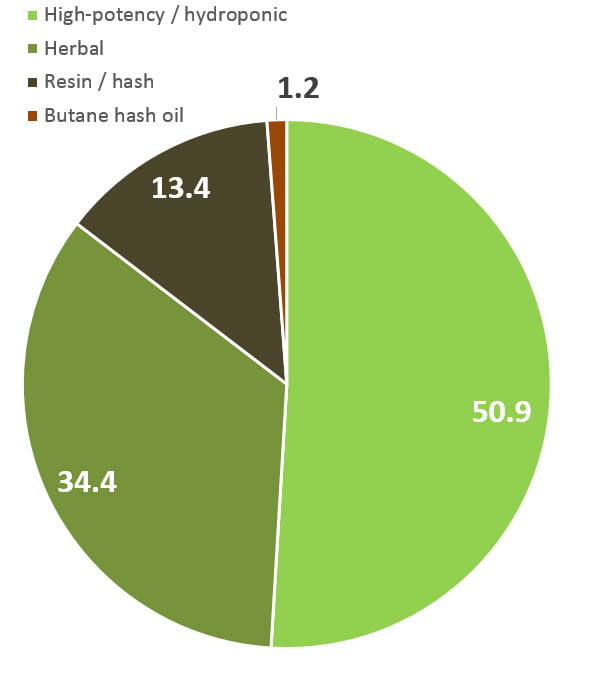 4. Lots of people are using vape pens to use cannabis

Unfortunately, because this method causes a lot of damage to people’s lungs. Another growing trend is that butane hash oil (BHO) is starting to nudge its way into the cannabis using community with over 2500 people reporting usage. GDS experts say that BHO works faster, is stronger and possibly has higher risks of swifter development of tolerance and withdrawal, although they say it’s too early to pass judgement. The graphic below shows the different ways people use cannabis: 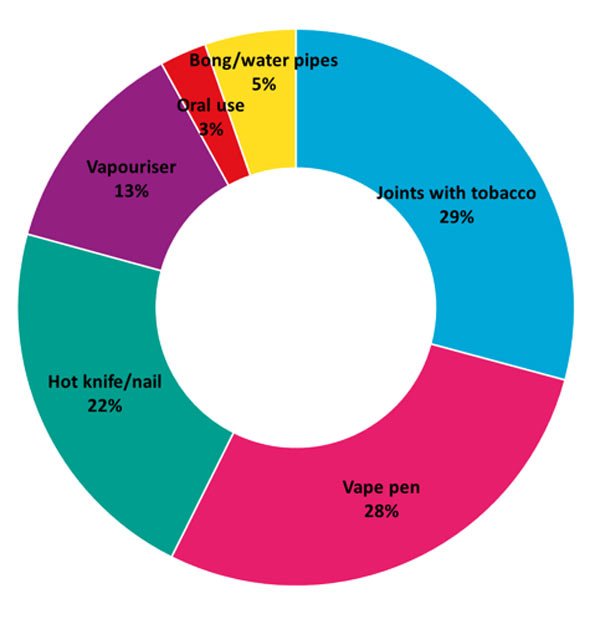 5. The risk of needing emergency treatment is 30 times greater with synthetic cannabis

For the third year running these drugs were more to likely to leave people needing emergency medical treatment than any other group we explored this year- with 3.5% of last year users reporting having sought emergency medical treatment in the last year (up from 2.5% last year). The risk increased to 1 in 8 users who reported using 100 or more times.  Our findings also highlighted the risk of dependence on these drugs with over 60% of those using 50 or more times reporting withdrawal symptoms on cessation.

In amongst all the hullabaloo about the government intending to ban all New Psychoactive Substances (legal highs), it was very interesting to note that the GDS found a decline in the use of “designer drugs” in the UK and elsewhere. The reason for this seems to be that, although being cheap, most of these new drugs offer a less desirable and more risky experience than traditional drugs. Here is the GDS graphic on their findings:

Intriguingly, the price of cocaine varies considerably across the world. New Zealand and Australia are the dearest places to buy basically because their border controls are great and the size of the markets they offer to cartels is small. There are also high prevalence rates of crystal meth in these countries, with some people using that drug, despite its much higher health risks. The sale of cocaine has evolved into a two tier market; in the graph below the light blue bars show the price of “normal” cocaine and the dark blue bars the (supposedly) higher grade, purer substance. Prices are in Euros. 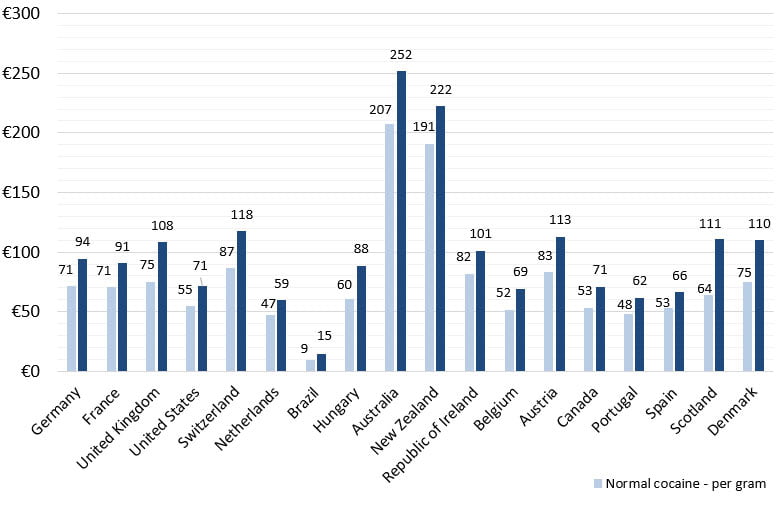 As I said in the introduction, what makes the Global Drug Survey unique is that it is overwhelmingly taken by people who are recreational drug users and are generally positive about their drug use. This means that when survey respondents express concern about different substances, we need to take it seriously.

This year’s survey found that three times as many people – 7.5% – reported being worried about the impact of laughing gas/balloons on their health. Nitrous oxide inactivates vitamin B12 and lack of that vitamin can cause anaemia and nerve damage.

GDS experts recommend that if you are experiencing numbness and tingling which persists after use, go and see your doctor.

9. Increased buying of drugs of the dark net

Despite the demise of Silk Road, this year’s GDS reported a big increase in people buying drugs off the “dark net”. Survey respondents said that the things they liked about buying drugs this way was that they were less exposed to violence, the quality of drugs was better and they appreciated not having to buy on the street. On the flipside, buying drugs from the dark net did tend to lead to people experimenting with new drugs.

The graphic below shows the popularity of buying drugs in this way in different countries – one in nine UK respondents had bought drugs of the dark net in the last year: 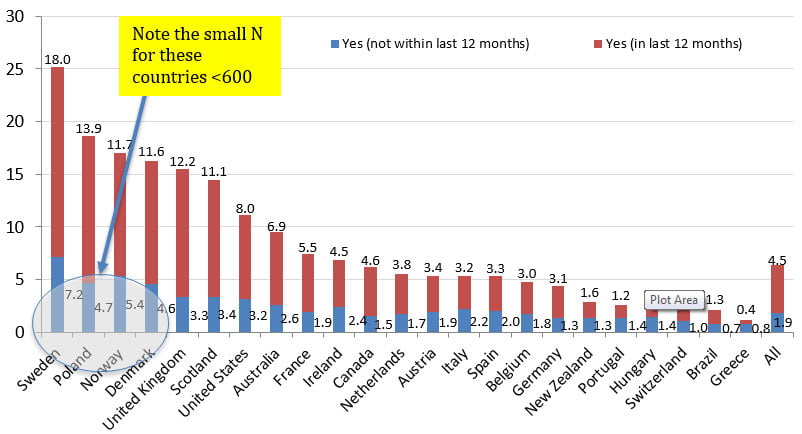 10. What are up and coming drug trends?

Ever since the UK missed the growth of crack cocaine and allowed a whole generation to become addictive without any proper support, many of us in the UK drugs field have been particularly keen to uncover developing trends. This is where the GDS is particularly helpful by giving us an increasingly comprehensive picture of what substances regular drug users consume and how they do so. In addition to the usual core survey of what drugs people are taking all over the world, next year’s GDS (launching in November 2015) will focus on six key areas: