While there are an increasing number of apps designed to help drug and alcohol users in recovery, drug dealers are also taking advantage of apps to increase their customer base.

There’s an app for that

Technological advances tend to be amoral and human beings use them for good and ill.

While there are an increasing number of apps designed to help drug and alcohol users in recovery, drug dealers are also taking advantage of apps to increase their customer base.

In a 2016 article for the Guardian, Leah Borromeo (@monstris) explored the use of such mainstream apps as  Instagram, Tinder, Kik and Depop for drug dealing.

I have just (4 April 2018) updated the post with another app running in to legal challenges – weedmap.

The process is simple.

On Instagram, people looking to buy drugs simply search via hashtags such as #weed4sale or the names of the drugs themselves (#mdma, #mephedrone etc). The customer then contacts the owner of the account and the deal moves along through direct messages.

In the case of Tinder, potential customers can swipe through profiles until they find a dealer and match with them.

Buyers can either meet face-to-face or pay online and have their purchases posted to them. While online payments such as bitcoin and pre-paid gift cards such as Vanilla Visa are encrypted, Ms Borromeo says that more traceable measures such as unattributed bank transfers and PayPal are also used.

This would seem to make it fairly easy for different police forces to boost their arrest rates.

Online dealers mostly sell their drugs as “research” even though pills are put in bottles or blister packs and powders in capsules.

In addition to the (mis)use of mainstream apps, there are also a number of apps dedicated to accessing drugs.

For a full rundown, check out this article by Annie Lesser but dedicated apps which piqued my interest for their ingenuity and entrepreneurship include:

Weedmaps (sometimes called Yelp for pot)  the smartphone app Weedmaps enables users to locate dispensaries and delivery services selling the green stuff. The company has been among the breakout success stories of legalization thus far.

While federal illegality in the US makes it very difficult for a company to sell cannabis in more than one state, Weedmaps faces no such constraints. As it is a technology company, content posted on its site by users isn’t regulated – even if that content relates to illegal practices.

With customers on both US coasts, Canada and Spain, it’s one of very few international marijuana brands. When a visitor lands in Portland, Denver or San Francisco, they might not know the local dispensary or product names, but they know to check Weedmaps to find out.

However, Weedmaps recently came under fire from Lori Ajax, California’s marijuana regulator, who said the company could face civil or criminal charges if it doesn’t stop promoting 900 unlicensed dispensaries in the state. The move comes as part of Ajax’s effort to stamp out the state’s gray and black markets; of the roughly 13.5m pounds of weed grown in California in 2016, about 80% was consumed illegally out of state.

Responding to Ajax, Weedmaps did something almost unheard of for a cannabis company: it politely told the regulator to get lost.

Mydx If you have $600 to spare you can buy a MyDx device that syncs to an app (CDx) on your phone in order to test your cannabis’s chemical makeup. The device is advertised in states where marijuana is legal to make sure there aren’t any pesticides in your weed as well as to develop a profile on how your body reacts to different chemicals found in your pot.

With MyDx, you can find the perfect strain to fit any mood. Probably the most practical aspect for this device/app combo applies mostly to those obtaining weed on the black market, as MyDx can be used to make sure your drugs are not laced with any harmful substances. The device and app developers behind MyDx are also working to apply this technology to test food and water for unwanted chemicals as well as air quality.

HighThere  Once you’ve had your cannabis delivered and had it checked for quality and safety, you can, if you want, find other stoners to enjoy it with.

This app is basically Tinder for stoners. You enter your energy level when on weed, what you want to do with the other party (chat, go out, or stay in) and list the activities you enjoy when high. Then you can click on different users’ profiles deciding if you would like to connect. 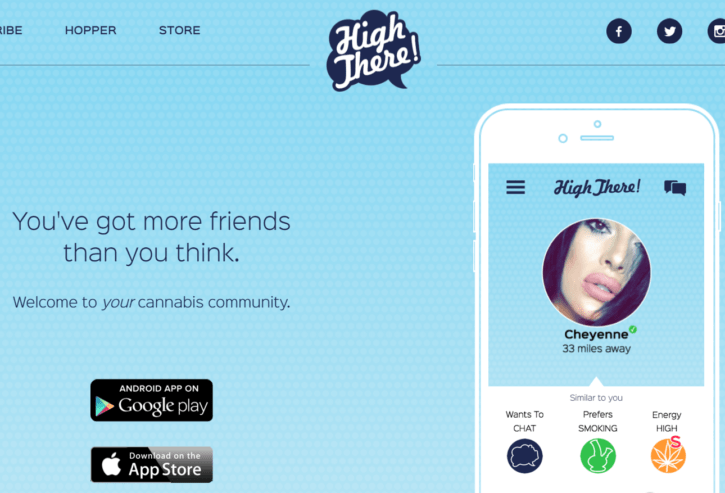 Finally, but not necessarily an app that Mary Berry would approve of, is THC Calc which helps you figure out the right amount of weed flour or oil to use when making your own “special” brownies.

When there are so many apps out there to help people access drugs more easily, the value of the work by the Global Drug Survey becomes even more obvious. GDS drugs meter app allows users to see how their drug use compares to other people just like them, offering objective, personalised feedback that takes their personal features in to account.

With an overview of total drug use and in depth analysis for nine drugs at present, drugs meter gives objective feedback informed by medical experts.

A secure, anonymous web and smartphone app, drugs meter is an independent and isn’t funded by any government. It is committed to giving honest, accurate information. All data is anonymous, secure and cannot be traced back to any individual.

Please share any drug apps that you think may be of particular interest via the comments section below.