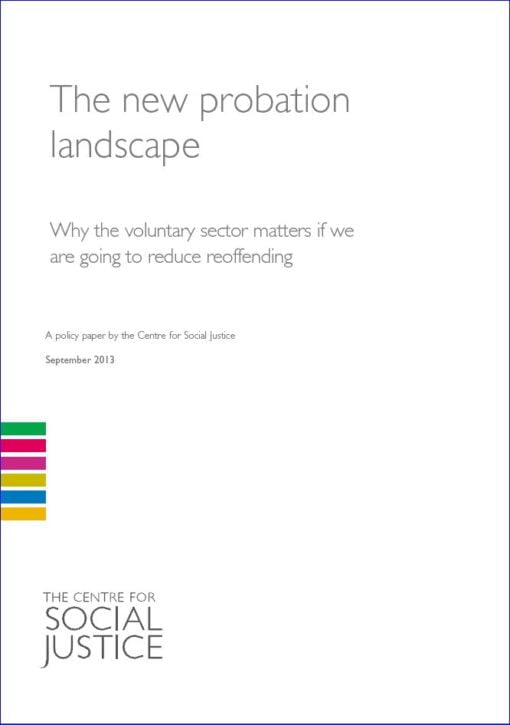 Subscribe
A new report from the Centre for Social Justice sees the criminal justice voluntary sector as critical to the success of the MoJ probation reforms. A survey completed by 173 organisations highlights hopes and concerns of a new world where relationships with large private sector companies are seen as the key to...

There are an estimated 1,475 charities, social enterprises and voluntary organisations whose main clients are offenders, ex-offenders and their families in England according to a 2010 Cabinet Office study.

The Centre for Social Justice (a think tank formed by Iain Duncan Smith in 2004) launched a new report, “The new probation landscape”, last week arguing that involvement of this criminal justice voluntary sector was critical to the success of the government’s Transforming Rehabilitation project.

The report makes the usual point about the heterogenous nature of the voluntary sector, with a few large organisations (CRI, Nacro, Catch 22) and a much larger number of smaller organisations.
More than two thirds of the survey respondents (69%) said they had 10 staff or less with almost a quarter (24%) reporting that they had less than the equivalent of one full-time worker.

The CSJ summarises the four key strengths of the criminal justice voluntary sector as:

To which I would add the ability and motivation to spot and fill gaps in provision.

CSJ asked these voluntary sector organisations whether they thought they would benefit from the Transforming Rehabilitation project.

Unsurprisingly, responses varied according to the size of the organisation.

Just over half (53%) of larger organisations were confident that the probation reforms would benefit their organisation.

Only 15% of medium-sized and 21% of small voluntary organisations were equally confident.

Organisations were also asked their views about working as a subcontractor to large Prime (normally private sector) providers.

CSJ does not break down opinion in this category but records a wide range of views – from confidence and hope that working with Primes would bring organisational benefits (such as access to better IT), to concern that Primes would not share common values, through to mistrust that they would be fair in sharing financial risk and payments.

The Centre for Social Justice describe the report as short and, in truth, it adds little to the work that the MoJ commissioned from 3Sc and partners earlier this year.

The recommendations are straightforward and reasonable:

The report does, however, note one other important issue.

The voluntary sector attributes its success to their independence from government and the fact that offenders are often not compelled by the courts to work with them.

If voluntary providers start delivering court-ordered services, will the special nature of this trust between provider and service user be put at risk?