Latest Clinks report on probation changes finds a ‘narrowing’ of services, with changes from one-to-one support to more group work, and from more flexible person-centred approaches to a more process driven or ‘box-ticking’ arrangements.

Change and Challenge – the voluntary sector’s role in Transforming Rehabilitation

Last week (31 May 2016) Clinks in collaboration with NCVO & Third Sector Research Centre published the second of a series of reports tracking the voluntary sector’s experience of the new probation system known as Transforming Rehabilitation [you can see a summary of the first report here].

Based on a survey of 151 voluntary sector organisations in mid-late 2015 into their views on the changes to probation, the report made six key findings and seven recommendations.

The key findings are set out below.

The pace of change is slow

The changes to probation services are taking a long time to embed. Given the scale of reform this is not entirely surprising but the pace of change has  still been much slower than many anticipated. The pace of change is reported to be curbing investment in the voluntary sector’s rehabilitation and resettlement services, meaning that services run by the voluntary sector are vulnerable and at a greater risk of closure.

The voluntary sector’s relationships with CRCs and the NPS are being negatively affected by a lack of communication about future strategy, service development and commissioning opportunities. Many voluntary organisations also report a mixture of confusion and uncertainty about what services are being offered through CRCs and the NPS.

The NPS needs to work more effectively with the voluntary sector

Only one survey respondent had a direct funding relationship with the NPS; apparently the ‘rate card’ system limits strategic engagement with the voluntary sector, restricts collaboration as well as innovation and increases the cost of services to the NPS.

Many voluntary sector organisations could not say whether Transforming Rehabilitation had negatively or positively impacted on services or service users, possibly because the transition to new approaches is still underway. However, those that had seen a change were more likely to report it as negative rather than positive. Additionally, only 3 in 10 organisations funded by CRCs to deliver services in supply chains felt that the level of funding they received allowed them to deliver a high quality service. The graph below shows survey respondents’ perceptions of the impact of the changes brought about by TR on service users: 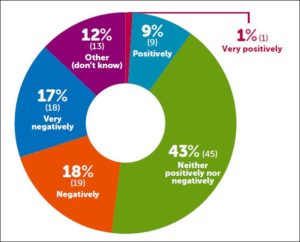 There was a perception that uncertainty and confusion during the transition period between probation trusts and the CRC and NPS structures had led to a reduction in services and some organisations reported that they saw a ‘narrowing’ of services, with changes in some areas from one-to-one support to more group work, and from more flexible person-centred approaches to a more process driven or ‘box-ticking’ arrangements. This was considered to be particularly damaging for service users with multiple needs or chaotic lifestyles.

Although most voluntary sector organisations reported that their funding for rehabilitation and resettlement services hadn’t been impacted as of yet, there is growing anxiety about the sustainability of services and evidence that the situation needs monitoring. Those outside CRC supply chains are more likely to believe that their services are unsustainable. Organisations also reported that a lack of information about CRC and NPS commissioning intentions is putting other funding sources at risk, particularly local authorities and independent charitable funders.

The Clinks/NCVO/TSRC report makes 7 recommendations aimed at NOMS, the NPS and the 21 CRCs: