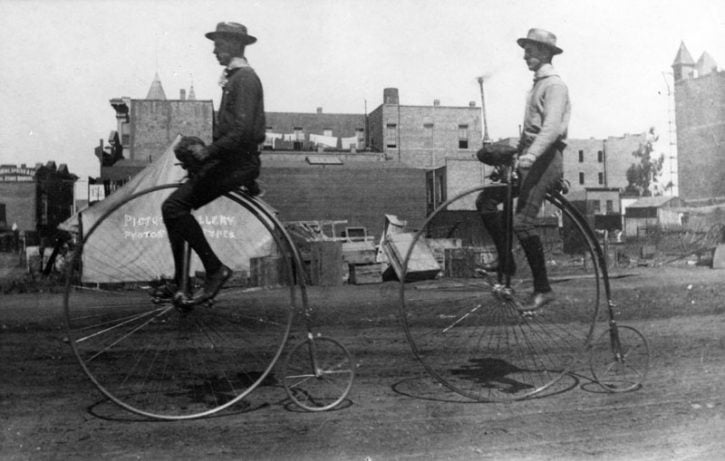 Efficiency in the criminal justice system

The National Audit Office (NAO) has just (1 March 2016) published a report into Efficiency in the criminal justice system from the point when a defendant is charged to when a court case concludes and decided (to nobody’s great surprise) that:

The system is not currently delivering value for money.

The NAO succinctly summarises the scale of and reasons for the difficulties in getting the police, prosecution and court processes working smoothly, saying that the system has evolved over time, has no single ‘owner’ and has been subject to regular change and reform. The NAO highlights the fact that the CJS incorporates a wide range of bodies with different functions and accountabilities. For it to work as efficiently as possible, each part must complete its work on time and get it right first time.

The NAO identify four main factors that make it difficult for the system to work efficiently:

The NAO presents some key facts about the prosecution and court process: 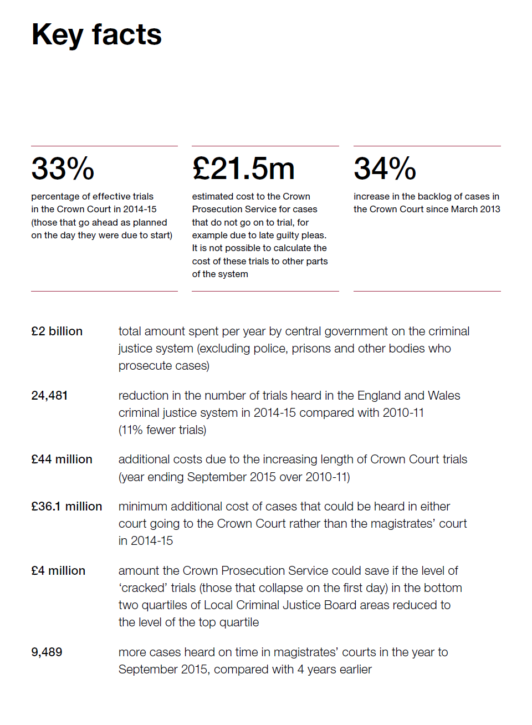 The NAO made four key findings:

Delays are getting worse against a backdrop of continuing financial pressure. Spending on the system has fallen by 26% in real terms since 2010-11 and this is set to continue. There are slightly fewer cases entering the system, but the complexity of cases has increased. Backlogs in the Crown Court increased by 34% between March 2013 and September 2015, and waiting time for a Crown Court hearing has increased by 35% (from 99 days to 134) since September 2013.

Two-thirds of cases still do not progress as planned, creating unnecessary costs. Trials that collapse or are delayed create costs for all the participants, including the CPS, witnesses and the courts. In 2014-15, the CPS spent £21.5 million on preparing cases that were not heard in court. Of this, £5.5 million related to cases that collapsed due to ‘prosecution reasons’, including non-attendance of prosecution witnesses and incomplete case files. The Legal Aid Agency funded defence counsel to the tune of £93.3 million for cases that were not heard in court.

Delays and collapsed trials also damage the public’s confidence in the system. Giving evidence in court as a witness or victim can be a difficult and stressful process. The uncertainty caused by delays and collapsed trials exacerbates this. Only 55% of people who have been a witness or victim in court would be prepared to do so again. Those who have experienced the system as a victim are less likely to believe it is effective than those who have not. 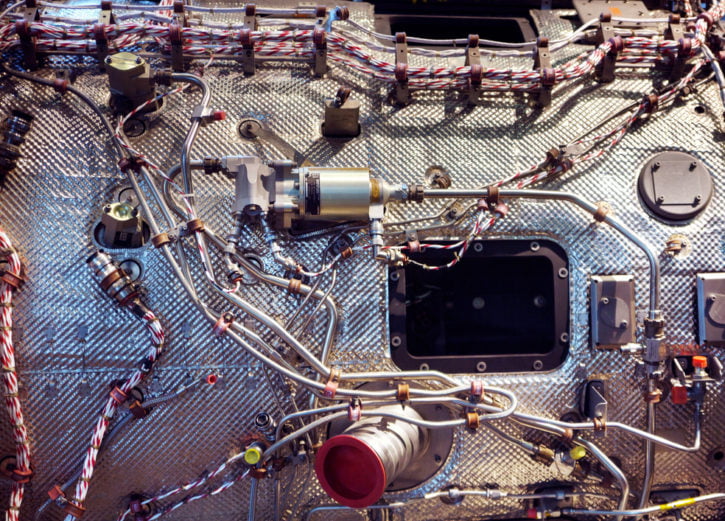 Addressing the causes of inefficiency

The MoJ and CPS are leading an ambitious reform programme but this will not address all the causes of inefficiency. The court reform programme’s scope is far-reaching. It includes rationalising and modernising the estate to enable more efficient digital working and the roll-out of a single digital case management system accessible by all parties. Better IT infrastructure and a modernised estate would provide the tools for a more efficient, less paper-based system, but are not sufficient to address all the causes of inefficiency in the system.

Inefficiencies are created where individuals and organisations do not get things right first time, and problems are compounded because mistakes often occur early in the life of a case and are not corrected. There can be multiple points of failure as cases progress through the system but these are often not identified until it is too late. A 2015 inspection found that 18.2% of police charging decisions were incorrect. Incorrect charging decisions should be picked up by the CPS before court, but 38.4% of cases were not reviewed before reaching court. The system’s reliance on paper also builds in inefficiency.

The system as a whole is inefficient because its individual parts have strong incentives to work in ways that create cost elsewhere. As there is no common view of what success looks like, organisations may not act in the best interests of the whole system. For example, courts staff seek, under judicial direction, to ensure they are in use as much as possible by scheduling more trials than can be heard so that there are back‑ups when one trial cannot proceed. This is both a cause and a result of the inefficiencies in the system, and leads to costs for other parts of the system, for example witnesses who spend a day waiting to give evidence for a trial that is not then heard, and who may then be more likely to disengage from the process.

There is significant regional variation in the performance of the system, suggesting that there is scope for efficiency gains. A victim of crime in North Wales has a 7 in 10 chance that the trial will go ahead at Crown Court on the day it is scheduled, whereas in Greater Manchester the figure is only 2 in 10. The large variation in performance across the country means that victims and witnesses will experience very different levels of service. If the performance in those Local Criminal Justice Board areas with the highest rate of cracked trials was equivalent to the best-performing quartile, 15% more cases would proceed as planned, saving a minimum of £4 million in CPS costs, as well as those costs incurred by other organisations.

There are some mechanisms to identify and share good practice, but awareness and use of these varies. Our case study visits identified a range of innovative approaches that made a positive impact on the system. These included implementing an appointment system for the approval of search warrants, which saved a significant amount of police time, and creating a dedicated videoconferencing court. But there is varied awareness and use of mechanisms to identify and disseminate learning from these initiatives.

Conclusion on value for money

The NAO concludes that the system is not currently delivering value for money. It acknowledges that adopting an approach to improve the whole system is challenging because the constituent parts must maintain their independence for justice to be done. However, it highlights the simple facts that:

Large parts of the system are paper-based and parties are not always doing what they are supposed to do in a timely manner. The system is not currently delivering value for money.

The National Audit Office’s latest progress report on the court modernisation programme finds it is behind schedule.