The crime figures for 2015 were published last week (21 April 2016) by the Office for National Statistics.

Many of the headlines were about the apparent rise in violent crime, an issue already analysed on this blog by Harvey Redgrave of Crest Advisory.

However, there were plenty more things of interest and I’ve picked ten of them to share with you below.

The decrease shown by the CSEW was largely driven by falls in theft offences (down 7%) and criminal damage (down 14%).

3: But police crime figures up

You can see these differences in the ONS graphic below: 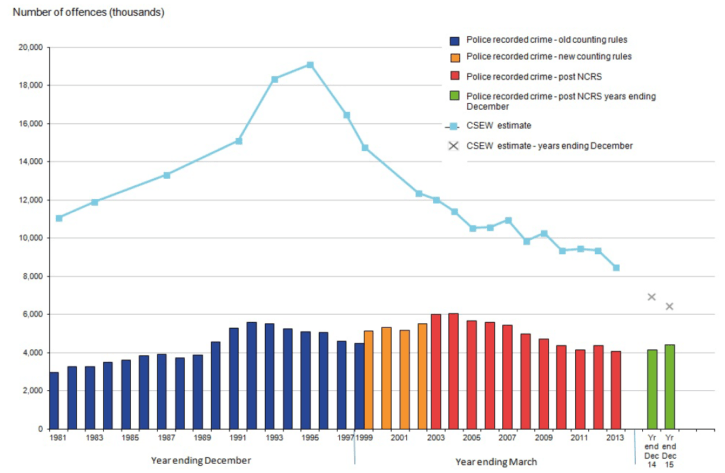 Improvements in recording of crime are thought to have particularly affected some categories of violent crime recorded by the police. There was a 27% rise in “violence against the person” offences (an additional 198,658 offences) which was largely driven by increases within the “violence without injury” subgroup (up by 143,239 offences; a 38% increase). The CSEW estimate for violent crime showed no statistically significant change compared with the previous year’s survey.

5: Sexual offences up through a combination of better recording and more reporting by victims

The police data also continued to show a rise in recorded sexual offences, with the latest figures up 29% on the previous year; equivalent to an additional 23,349 offences and bringing the total to over 100,000 in a single year for the first time (103,614). The numbers of rapes (34,741) and other sexual offences (68,873) were at the highest level recorded since the introduction of the National Crime Recording Standard in the year ending March 2003. As well as improvements in recording, these rises are also thought to reflect a greater willingness of victims to come forward to report such crimes.

6: Online fraud figures up – but still tip of the iceberg

There was a 4% increase in the volume of fraud offences referred to the National Fraud Intelligence Bureau (NFIB) at the City of London Police. In total, 617,618 offences were referred to NFIB, including 224,683 offences reported by victims to Action Fraud (the UK’s national fraud reporting centre), 295,525 referrals from Cifas (a UK-wide fraud prevention service) and 97,411 cases from Financial Fraud Action UK (FFA UK; a body that represents the UK payments industry). It is known that many cases of fraud do not come to the attention of the police, and these figures provide a very partial picture. A more complete picture will be published in July 2016 when early estimates are available from new CSEW data on fraud and cybercrime.

Offences involving firearms increased 4% (by 200 offences to 5,122) in the year ending December 2015 compared with the previous year. However, this was largely driven by an 18% increase in offences involving imitation and other weapons such as BB guns and soft air weapons; by contrast, offences involving handguns, shotguns and rifles decreased by 1%.

The number of offences that involved a knife or sharp instrument also showed an increase (9%) over the past 12 months. This contrasts with the general downward trend in this series over the longer-term, although the latest figures are 14% lower than in the year ending March 2011.

Around 1.8 million incidents of anti-social behaviour (ASB) were recorded by the police for the year ending December 2015, a decrease of 8% compared with the previous year.