Finally Friday is an occasional series of posts which look at the lighter side of life.

In particular, I delight in rounding up examples of criminals whose own stupidity is the main reason they were brought to justice.

There have been a couple of distinctive examples over the last month.

Emma Way drove so recklessly that she knocked a cyclist off his bike.

She did not stop to see if he was all right.

She did not report the accident.

Ms Way might only have had 100 followers on Twitter but, as Sally Bercow and many others know, tweeters can smell a dodgy tweet from the other side of the World Wide Web.

By the time Ms Way had deleted her Twitter account, Norwich Police were soon in on the act and advising her, via Twitter, to report the accident ASAP.

@emmaway20 we have had tweets ref an RTC with a bike. We suggest you report it at a police station ASAP if not done already & then dm us

Ms Way ended up having to make a full confession on the BBC and police are “progressing with their enquiries”.

Our second instance of criminal stupidity feature Wayne Braud, a member of a large drug gang based in Rochdale.

The ten man team imported drugs concealed in tinned goods and prided themselves on being untracelabe because they used pay as you go mobile phones from which they deleted all data before disposing of them.

Unfortunately, Mr Braud wasn’t so security conscious, helpfully spelling out his nickname in cocaine and getting an accomplice to take a photo: 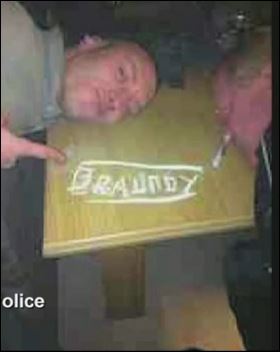 The gang were sentenced to a total of 92 years and you can see the full story on the Merseyside Police video below: