The latest Office for National Statistics bulletin on crime in England and Wales covers crime in the calendar year 2014 and was published on 23 April 2015.

For this post, I have decided to focus on drug offences. The number of drug offences recorded by police rose steadily between 2000/5 until 2008/9 when it peaked at 243,536. After plateauing for three years, the figure started to fall and the police recorded 178,719 drug offences in the year ending December 2014 – a decrease of 11% compared with the previous year.

The ONS report makes it clear that the number 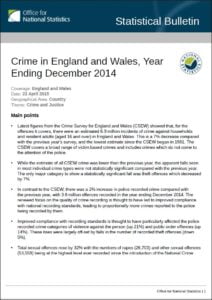 For example, the increases in the recording of drug offences between 2004/5 and 2008/9 coincide with a priority placed on Public Service Agreement targets. The police have also been granted extra powers over the last decade including the ability to issue a warning on the street (rather than at a police station) for possession of cannabis offences in April 2004 and the power to issue penalty notices for possession of cannabis from January 2009.

As has been the case for most of the last decade, possession of cannabis offences account for approximately two thirds of all police recorded drug offences – 66% in 2014.

The impact of cuts

Although the ONS bulletin restricts its commentary to the way in which police activity affects the number of recorded drug offences, it is obvious that the continued cuts in the number of police officers will almost inevitably result in fewer drug offences being recorded next year.

It may be that this backdoor, de facto decriminalisation is the only way that the UK will change its stance on the legal status of cannabis

The Statistics on Alcohol for 2020 showed there were 358,000 admissions to hospital last year primarily due to alcohol consumption a 6% jump on the previous year.