Is car theft a thing of the past?

The demise of vehicle crime

Looking at the UK situation within an international perspective, “Reducing criminal opportunity: vehicle security and vehicle crime” examines how new security measures have drastically reduced the number of car thefts by over 80% over the last twenty years. The chart below shows the drop in vehicle theft according to both Police Recorded Crime and Crime Survey for England and Wales data: 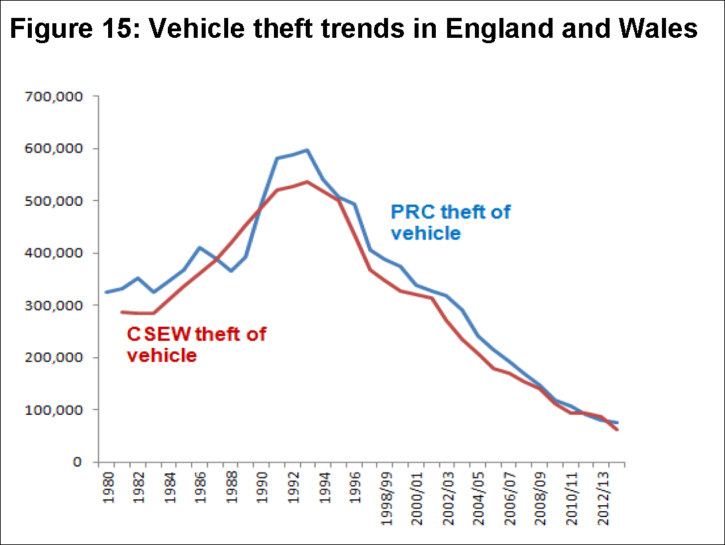 The report attributes this significant drop in car theft to the introduction of a wave of security devices in the 1980s and 1990s including central locking, car alarms and, most importantly, electronic immobilisers.

The different rates at which immobilisers became a standard fixture on cars in different countries allowed the researchers – Nick Morgan, Oliver Shaw, Andy Feist and Christos Byron – to demonstrate that initially immobilisers have a limited impact on car crime as car thieves switch to unprotected older cars.

However, once immobilisers are fitted to a majority of cars, the drop in car crime is pronounced: 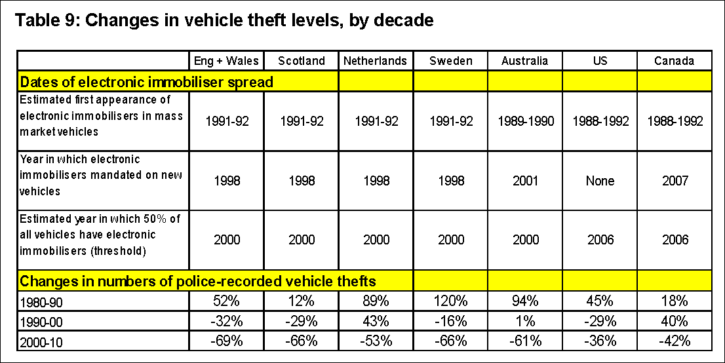 What about the future?

Interestingly, the Home Office Study reports a 3% rise in police-recorded thefts of vehicles in the year to June 2015, the first rise in two decades. However, this appears to be mainly due to an increase in stolen scooters and motorcycles. Motorbike thefts fell in line with other crime from 1995 to 1999, but from 1999 numbers of thefts have been quite stable, while thefts of cars fell sharply. This was probably due to the fact that motorbikes are less well protected by security for the simple reason that they are easier to transport away from the scene without cracking the immobiliser.

The report concludes with an interesting unanswered question.

The authors are unable to answer this question but speculate about four possible reasons:

If the last possible reason is, in fact the main one, car manufacturers will need to start developing a new wave of vehicle security to ensure they stay ahead of the technological curve.