Economic Perspectives on Incarceration and the Criminal Justice System

A fascinating new paper was published by the White House last week (25 April 2016); entitled Economic Perspectives on Incarceration and the Criminal Justice System, it consists of the slides from a presentation by Jason Furman Chairman of the Council of Economic Advisers to Obama’s administration whom you can follow on Twitter: @CEAChair.

[Many thanks to Rob Allen for bringing it to my attention.]

The growth in incarceration

Mr Furman’s paper starts by setting the context of a huge growth in incarceration in the US since 1980.

He makes the point that incarceration has grown despite a big fall in crime rates.

Exactly the same phenomenon has taken place in the UK over the last twenty years, a substantial growth in the prison population with a corresponding dramatic fall in crime.

Mr Furman goes on to summarise the economic research which has found that imprisoning more people is unlikely to have much impact on reducing crime:

The wider impact of incarceration

He continues by setting out the wide range of “collateral consequences” for individuals with criminal records, their families and communities:

Being an economist, Mr Furman naturally sets out a cost benefit analysis of different criminal justice policies. He estimates the social cost of crime (based on 2014 crime figures at 2015 costings) as $3.079 TRILLION in the USA.

His review of the literature suggests that sentencing changes and increased use of prison are the least effective policies: 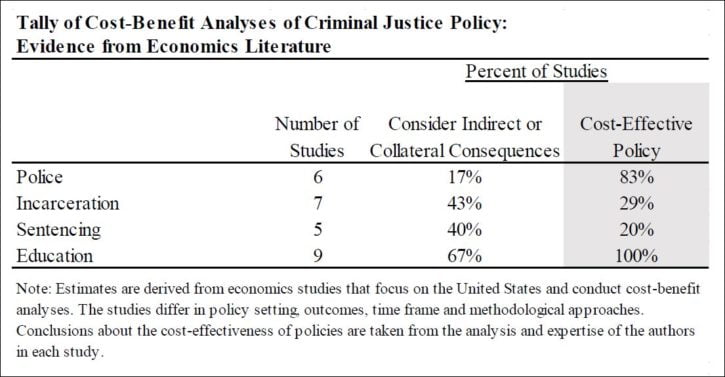 It is Mr Furman’s conclusion though which is making headlines: 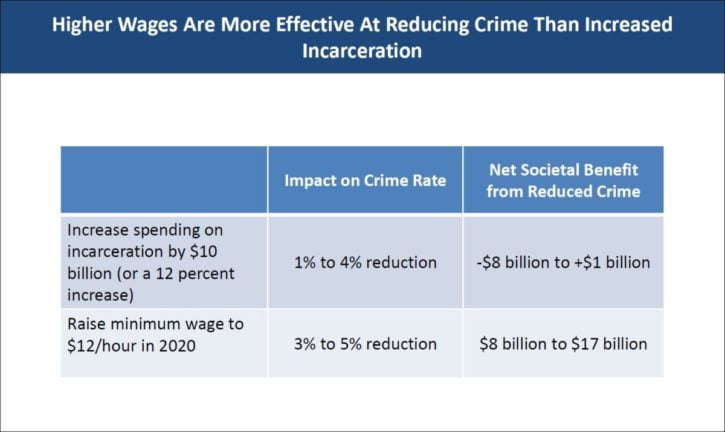 If we translate this analysis to the UK, it may be that George Osborne’s “National Living Wage” — a commitment to raise the minimum wage to £9 per hour by 2020 — is a more powerful crime reduction tool than any of Michael Gove’s proposed reforms.

Of course, if Mr Gove can reduce the prison population, he may be able to substantially offset the cost of the minimum wage — reducing the average numbers in prison by 10,000 would save over £350 million per year and still mean that we imprison our citizens at a rate one third higher than France and one half higher than Germany.