Changes to Stop and Search

The Home Secretary, Theresa May, has acknowledged openly that police use of Stop and Search remains problematic. Official data from the Home Office last year revealed that Black people aged 10 years or older were SIX times more likely to be stopped and searched than their white peers.

The Best Use of Stop and Search

The Home Secretary, Theresa May, has acknowledged openly that police use of Stop and Search remains problematic. Official data from the Home Office last year revealed that Black people aged 10 years or older were SIX times more likely to be stopped and searched than their white peers. To try to address this issue, she announced in a statement to Parliament on 30th April 2014. The main aims of the scheme were

These aims were to be achieved by: 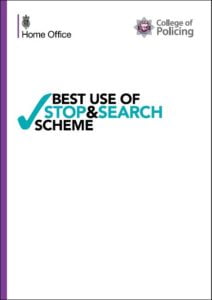 announced an update to the Best Use of Stop and Search Scheme which revealed that all 43 police forces in England and Wales have signed up to the “voluntary” scheme and 24 will implement two key elements (the improved recording and reduction of Section 60 stops) immediately.

The detailed guidance accompanying this announcement was produced with the College of Policing which is charged with  improving Stop and Search by:

Reviewing and developing the evidence-base, training and guidance so that police officers at every level in the service are equipped with the right knowledge and skills to conduct effective stop and search.

Sharing areas of good practice where stop and search has reduced, the quality of encounter has gone up and arrest ratios increased.

Perhaps the most important announcement is that from 26 August 2014 Stop and Search data will be available on data.police.uk

Here’s an example of the sort of data currently available:

West Mercia Police will pilot the geographic mapping of stops and searches, ahead of a national roll-out in the New Year, to further increase transparency and accountability.

In my opinion, it’s this transparency which may have the most significant impact on improving practice.