A restorative community in HMP Dartmoor

Tom Ford from the Centre for Peaceful Solutions on a pilot restorative community within HMP Dartmoor.

This is a guest post by Tom Ford from the Centre for Peaceful Solutions.

The Centre for Peaceful Solutions (CPS), founded by Maria Arpa MBE uses the Dialogue Road Map (DRM) to reduce violence and unnecessary human suffering. DRM is implemented within established systems and disempowered communities to work with them to change attitude towards conflict and help resolve disputes peacefully.

Prisons in England and Wales are in a state of crisis with repeated accounts of “overcrowding, rising levels of violence and self harm and concerns about safety, substance misuse and deteriorating physical conditions. This has been occurring against a backdrop of significant cuts to prison budgets and staffing levels”. Because of this the House of Commons Justice Committee has called for ‘sustained implementation of an overarching strategic approach to prisons policy’ as prisons main purpose is to ‘reform and rehabilitate prisoners’. As part of this reform Prison Governors have been given greater autonomy to pioneer new initiatives in how they ran their prisons.

After years of planning, fundraising and work in some prisons in the UK Maria met a managing Chaplain who made introductions to the Governor at HMP Dartmoor who at the time was looking for ways to implement a regime that would break the normal chain of suffering, self harm and violent behaviour.

CPS was able to have the unique opportunity to create a pioneering demonstrator project: to create a restorative community within HMP Dartmoor.

In 2017 Maria and CPS begun training Prisoners and Staff into Facilitators of the Dialogue Road map. Very quickly it became clear the help was needed not just in one room in the heart of HMP Dartmoor but potentially across the whole Prison system.

The Dialogue Road Map is a system of communication which will take individuals, institutions and organisations to a place of harmony by transforming hostility, resistance, aggression and indifference into collaboration and contribution.

What if there was a process that could be applied across the prison system?

A system that would ensure all needs are met, defusing conflict and fundamentally changing how we live?

Prisoners at Dartmoor were put through an interview process and selected as potential Facilitators to lead a project off the ground that would potentially change lives. They will study theories of non-violent communication, learn set phrases with which to defuse disputes, and test practical techniques, from body language to mindfulness.

Behind the forbidding, grey stone walls of Dartmoor prison,  a circle of prisoners has closed around two figures engaged in a dispute over the drug spice. Something unusual is happening, however. Instead of violence, perspectives are being traded. Slowly, a resolution is reached, even a degree of begrudging empathy. The observers sit, transfixed, as the role-play ends. “If I’d known this years back, I might not have taken a man’s life,” reflects one later.

Prisoners adapt into Facilitators by beginning their own change process, realising they need to work on themselves just as much as helping others. Sitting and listening to another prisoner being able to identify their feelings and as a result probing and finding out what needs that prisoner has and then trying to initiate the process for that individual to find out how those needs are met is really at the core of this process.

If these needs can be met in this 1-2-1 process of sitting in a room and listening to one another then great. However if the need is for some understanding from another prisoner or officer then the skills learnt from Maria to facilitate a mediation is then actioned. This process is then begun by speaking to the parties involved individually first and then bringing them together to let these individuals have their own time to speak in the same room, hear each other out, find a common ground and then eventually coming to some agreement.

An example of this has been where a prison officer is continually searching a prisoner’s cell suspecting him of having contraband. In this case the prisoner believes the guard is just singling him out, bullying him and purposely searching his cell because it’s a way of the guard getting one up on him. It wasn’t until the prisoner came to the team of DRM Facilitator’s was able to initiate the confidential mediation process. The Facilitators were both able to have 1-2-1’s with both the prisoner and prison guard to gather all information and gain permission from both individuals to have some time together in a room. After both parties being in the room together they both were able to hear from each other. The officer was actually only acting on instructions from his line managers and the prisoner was feeling singled out continually due to lack of communication. The agreement was that the officer was able to give better communication before a cell search and the prisoner was able to feel less singled out because he was able to gain a reason from staff because of the cell search.

A prisoner at the start of a life sentence said;

“If I’d known this six months ago, I wouldn’t have murdered my wife.”

“I lost my friend, he killed himself in another jail. If the Dialogue road map had been in place, it would have given Him a voice. He could still be here.”

As you can imagine with any big system after a number of years something this huge of a change would have to be implemented slowly and the transition from 3 facilitators to 25 facilitators was a long one.

However after 3 years CPS had been able to demonstrate how the Dialogue Road Map had reduced violence, conflict and re-offending, improved wellbeing, built effective relationships and developed self-responsibility and accountability. A culture change on the inside which translates into self-responsibility on release which in turn we believe has already reduced violence in society and therefore reduced the number of victims.

One prisoner has said ‘Much of the last year the project has just not known if its going to survive, listeners and Samaritans were not existent, staff were stripped back and had to stay at home, complete isolation for 23 hours a day and we still managed to form a group of prisoners that were just their for every single person within this prison that needed somewhere to have that open dialogue whenever there was a spare moment to do so, truly proud of what we’ve achieved’.

DRM has been transformational not just for those facilitators within the prison but also for all those prisoners and staff who thought they wouldn’t be able to talk to someone, who didn’t think they had the skills to change and those individuals; have spent the last 12 months not knowing what will come next. Mental health has never been worse and what DRM at Dartmoor has shown in a place where dialogue and interaction was nearly non existent that everyone can have a voice and anyone can pick themselves up and live in an environment without conflict and without violence and demonstrate real change into an establishment that’s truly in deterioration. 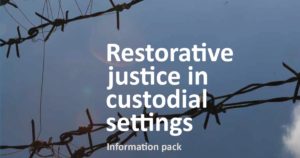 If prison governors want to reduce reoffending while promoting the interests of victims in the justice system, it is vital that they ensure restorative justice is available.