Welcome to the second in my series of posts helping probation trusts (and other organisations) get the most out of Twitter.

Again, you might think this is not worth spending much time on. But when anyone is scrolling through a Twitter timeline of hundreds of Tweets, you want people looking for your tweets to be able to find them easily. 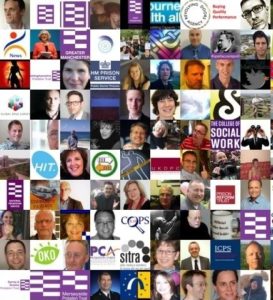 Which brings me to my first rule.

I know it’s Easter, but no eggs on Twitter.

This is a Twitter egg, available in a range of colours:

The best Twitter accounts, the ones that attract the most followers, are the ones which are personal, which have something interesting to say.

An egg is not personal. It has no personality.

Yet 20 of the current crop of probation tweeters use an egg as their profile picture.

You can use any (non-obscene) image as your profile picture. If you want to be anonymous, pick something quirky that expresses something about your personality.

@TheCustodySgt is a well loved and respected police Tweeter and Blogger (yes, he’s a Custody Sergeant).

He has made a conscious and very carefully thought through decision to tweet anonymously.

Indeed, @TheCustodySgt is a thoughtful kind of guy which is why he has 5,000 followers on Twitter and a very popular blog.

Here’s what he says about choosing your Twitter profile pic if you are going to tweet anonymously:

“If you are anonymous like myself then again the image choice is important. There are some good stock images about on the internet but it doesn’t take long to realise that somebody else is probably using this too. It needs to be something unique to you. Something that defines who or what you are. Something that nobody else will have.”

@TheCustodySgt has had a number of profile pics over the years – a bunch of cell keys, a hand putting a key in a cell lock. His current pic is my favourite.

He took the photo of the fridge on the spur of a moment at the Eden Project, quickly assembling the plastic letters.

Recently he has superimposed another little image over the top which is special to him and to those that know him or read his blog.

I like it because it’s quirky and because it somehow represents @TheCustodySgt who tweets a lot about his domestic life, particularly his kids. He’s often doing something in the kitchen, when he’s not in charge of the custody suite.

This is why the Sarge himself likes it:

“The beauty is that it’s unique. Nobody else will use it as it’s got my name on it. It’s recognisable and when I tweet people will see it and know it’s me.”

If you are not tweeting anonymously, then there’s two main routes to go (although you can of course choose your own quirky image): personal or corporate.

The simplest way to make your Twitter account stand out and give it something of your personality is to put a photo of you on it.

Think of your Twitter photo as your passport photo or work ID, but one that you want to show the whole world, several times a day. In other words, pick a nice one.

We’re not all gorgeous, but we can all smile. We can all look at the camera and we can all choose a picture that’s in focus. Anyway, Twitter is forgiving, the picture is only thumbnail size.

Though you can use an image with quite a high level of definition – the file can be up to 700kb in size.

Oh, one more thing. The Sarge recommends you get someone else to take the photo –  those ones you take yourself and then try to crop the arm holding the phone out of the photo look terrible.

Of course, the decision is different if you are setting up a probation trust corporate account. You probably want to use your Trust Logo.

The problem with corporate logos is that when reduced to Twitter size, many probation trust logos look the same.

I counted 18 current probation twitter users, corporate and individuals, which have a variation on this one which happens to be @CumbriaProb

If you do want to go with the purpleandwhite, try something like @ASPTrust’s version to differentiate it:

If you are going to use your Trust logo, invest some time in trying to make it look unique.

Make sure you use an original, clean version, rather than use your phone to take a photo of your letterhead.

Be warned though. People have lower expectations of official twitter accounts.

Many are more likely to follow a personal account of someone who tweets from a more individualised viewpoint and is prepared to engage in discussion and debate.

How to do it

Anyway, the choice is yours and the process for choosing or changing a profile picture is straightforward:

Next Wednesday, we will look at writing your Twitter profile itself.

In this one case, Twitter breaks its own golden rule and allows you 160 characters to describe yourself and your organisation in the best way you can.

You’ll be amazed at what a good (or bad) job you can do within these parameters.

Have a good week till next week.