A distinct approach to young adult women is likely to give them the best chance of growing out of crime and leading happy, healthy and productive lives.

Young women in prison are more likely to suffer from a toxic mix of fear and boredom than older women, according to new research just (26 February 2016) published by the Transition to Adulthood (T2A) Alliance.

The report argues that prisons are failing to address the distinct needs of young women aged 18-24, including education and mental health needs, in the face of evidence that they should be treated differently to older women in custody. In the youth estate, teenage girls are viewed as having such specific needs that not one girl under 18 is held in a young offender institution, making the transition across to the women’s estate when they turn 18 particularly stark and risky.

Yet Rob Allen’s new research for the Transition to Adulthood (T2A) Alliance has found that all women over 18 are treated the same and mixed together. This is in contrast to young men, for whom there is separate legislation and distinct young adult establishments.

The research is based on a literature review, an analysis of prison statistics and of Prisons Inspectorate and other reports about women’s prisons as well as visits to four prison establishments. Discussions were held with a number of young women prisoners and staff. An expert seminar was also held to discuss a draft of the report in August 2015.

18-24 year olds account for around 16% of women in prison, a proportion that has declined in recent years. However, HM Inspectorate of Prisons noted in its 2015 Annual Report that

the reduction of young adults over recent years has been significant and is to be welcomed. However, those who remain are some of the most vulnerable, troubled young adults and have complex needs.

It is likely that half will have more recently been in statutory care, and the victim of more recent traumas compared to older women who are likely to have experienced these events longer ago. Young women are also particularly vulnerable to exploitation by other prisoners (both other young adults and older women).

Young women report a poorer experience of prison than older women, especially in their first nights. Ongoing neurological and hormonal development of young women in prison increases the susceptibility to peer pressure, being unable to cope with prison life and mental illness. Young adult women are more likely to self-harm, and the most common age of self-inflicted deaths of women in prison was 20 years old and over a fifth (21%) of deaths were of those aged between 18 and 21.

Despite some efforts made in individual institutions to meet the needs of this age group, the report finds that prison regimes do not sufficiently follow the Prison Service Order to provide younger women prisoners more supervision and activities. Recent inspection reports of women’s prisons have consistently highlighted a lack of strategy and service for young adults, with not one young women-specific accredited programmes available in the estate.

A lack of progress in prison education was highlighted as a particular concern. The report calls for a strengthening of existing guidance and staff recruitment to enable effective, distinct management of young adult women in prison, and the introduction of a presumption against short prison sentences for non-violent crimes. 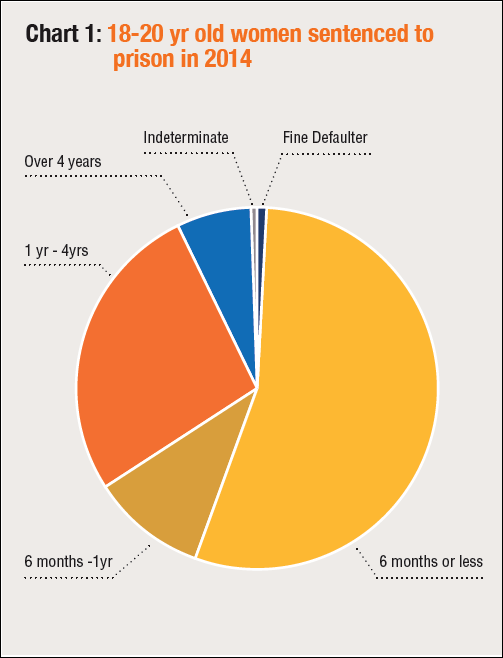 Despite a growing and overdue recognition by criminal justice services that young people do not magically achieve adult maturity on their 18th birthday, there’s an important group of young adults whose needs have not yet fully been analysed let alone met- young women.  Whether it’s because numbers are small or a sense that their characteristics differ little from those of older women, recent initiatives have neglected to consider how best young females should be managed when they come into conflict with the law. A distinct approach to young adult women is likely to give them the best chance of growing out of crime and leading happy, healthy and productive lives.

A new approach to women’s prisons?

What does the prisons white paper say about the government’s new approach to women’s prisons?

The power of creative writing in prison

How bleak is the crow’s nest. An anthology of women’s prison writing