A new (April 2016) paper from the Reform think tank sets out a new model for performance measurement for prisons.

The authors, Elizabeth Crowhurst (@LizCrowhurst) and Eleonara Harwich, place their report in the context of David Cameron’s speech announcing the creation of new prison league tables which would balance the need to dip test performance at a given point in time with measuring longer-term outcomes.

There are as yet no details about how these league tables will work and the Reform paper seeks to fill this gap and lays out a new model for performance measurement. Through ranking a group of comparable prisons against a frontier of best practice Reform also aims to identify high – and low – performing prisons and thus the scope for improvement across a number of metrics.

It’s quite common for Reform to advance views in keeping with the latest thinking among Conservative-minded politicians and thinkers which always makes their reports worth reading.

A model for performance monitoring

The Reform model considers prison efficiency by evaluating whether prisons spend wisely, keep prisoners and staff safe and promote rehabilitative activities. Secondly, an evaluation of prison effectiveness looks at how successful prisons are at reducing reoffending and supporting prisoners into education, training, employment and accommodation on release. Taken together these measures allow an assessment of performance in the short and long term, and most importantly help determine whether individual prisons are delivering value for money to taxpayers.

Unsurprisingly, Reform draw attention to a significant need for improved data availability and quality arguing that the success of any performance model hinges on the integrity of the data used and stating that current data is both lacking and poor quality. In particular, publicly available financial data is woefully inadequate. Whilst some financial data can be obtained on public prisons via a Freedom of Information request, the Ministry of Justice do not even collect this data for private prisons.

This limits the ability for contractors to be held to account and makes it hard to assess whether establishments such as HMP Oakwood (run by G4S) really offer public value for money as is claimed by their comparatively very low claimed average cost per prison place — £12,210 per annum. Interestingly, Reform found that although some larger prisons are cheaper than their smaller counterparts, but this pattern is not universal. 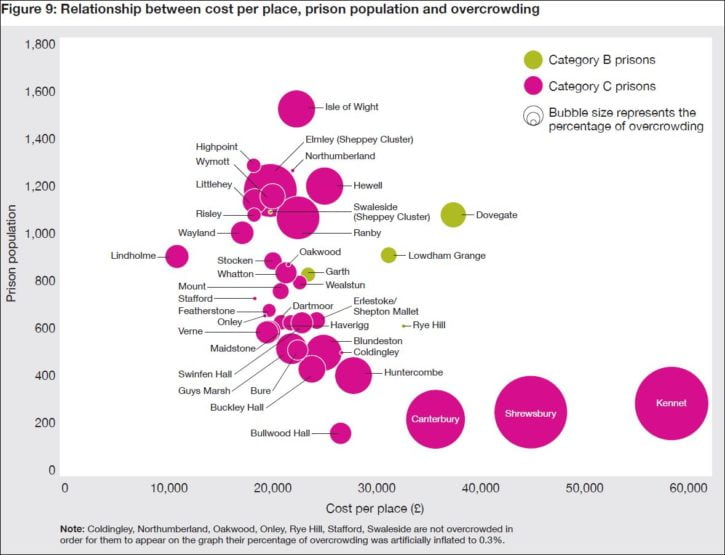 Within these data constraints, Reform’s analysis of 40 Category B and C prisons shows that, across the four efficiency and two effectiveness indicators, there is significant variation in performance. They argue, quite reasonably, that closing the gap between the best and worst performing prisons therefore presents considerable opportunity to both realise savings and improve outcomes.

Interestingly, the analysis also shows that the most efficient prisons are not necessarily the most effective, reinforcing the potential need to make trade-offs in the short and longer-term.

Data availability and quality prevents further analysis of this, but Reform argues that the Ministry of Justice should prioritise further examination of those prisons which are able to buck the trend and perform well against both measures.

Reform argues (and I agree) that the forthcoming Prison Reform Bill provides an opportune moment to address these issues and bring greater clarity and transparency to prison performance. This is an essential step for a Justice Secretary committed to reforming the prison estate to deliver better outcomes for prisoners. Greater transparency and a focus on outcomes are also essential for increasing productivity and delivering value for money.