It's no surprise that the government is such a strong supporter of social investment; at a time when investment in public services is being cut substantially year after year, #socinv is a key source of extra funding.

It is my ambition to have a Social Impact Bond market worth more than £1 billion by the end of this Parliament.

The strategy, published on 11 March 2016, outlines how, over the next 5 years, the government will:

The strategy starts, as most government documents since time immemorial do, by trumpeting its successes:

This boast is repeated in the infographic reproduced below: 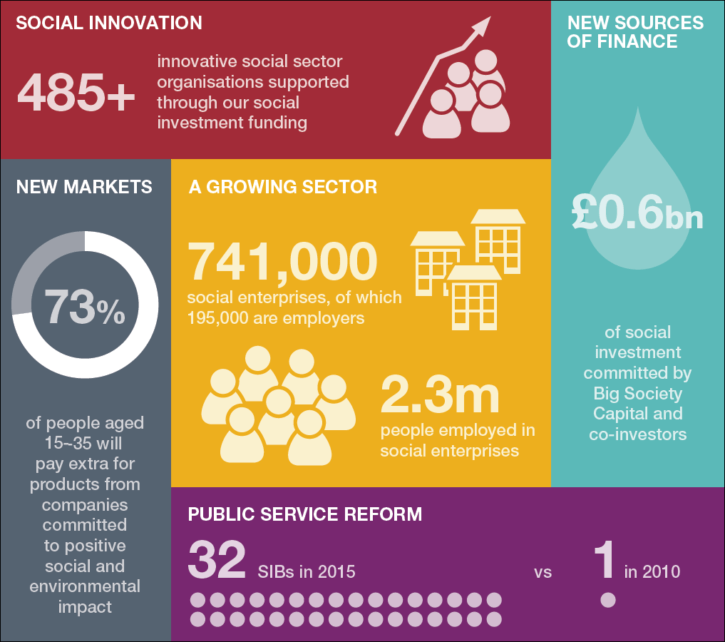 It’s no surprise that the government is such a strong supporter of social investment; at a time when investment in public services is being cut substantially year after year, #socinv (as it’s abbreviated on Twitter) is a key source of extra funding. Social Impact Bonds are flourishing all over the world for the same reason, particularly Australia and the USA.

[For more information about Social Impact Bonds, check out this post.]

Increasing the supply of social investment

To be fair, the government has been active in promoting social investment.

The government also stimulated the social investment market through development of the world’s first Social Investment Tax Relief (SITR). SITR provides a financial incentive for individual investors to provide social investment capital and is set to unlock £480m worth of investment over the next five years. Fifty-five applications from enterprises for SITR eligibility had been received as of December 2015.

The government’s strategy for increasing demand for #socinv is called the Investment Readiness Programme, launched in 2012 to allow social sector organisations to purchase tailored capacity-building support. This is designed to help them secure social investment and win public service contracts. For every £1 of support from the fund, £18 has been generated in contracts and private investment. The government also focused on earlier-stage ventures through the Social Incubator Fund. This £10 million fund was matched by over £10 million from private investors, and backed 10 social incubators to provide capacity-building support to over 235 social start-ups. In 2014, the government launched the Impact Readiness Fund, a £1.5 million grant-making fund that will support social sector organisations to measure their impact.

As many regular readers will be aware, voluntary sector organisations and probation mutuals made use of the Investment and Contract Readiness Fund to improve their chances of providing the new probation services under the Transforming Rehabilitation programme although none of these organisations appeared to win any sizable contracts in the actual competition.

The government also created the Centre for Social Impact Bonds to act as a market champion for SIBs. It provides expertise and a range of tools, including a unit cost database and template contract, to support new SIB development. Ther

e is also a £20 million Social Outcomes Fund, catalysing the development of 18 locally and centrally commissioned SIBs through top-up funding. It is addressing a range of social issues, from youth unemployment and children in care to long-term health conditions and social isolation.

The future of social investment

The government announces its intention to partner with a  UK university to establish a centre of research and technical excellence on outcomes based commissioning. This centre will also provide early-stage support to local commissioners looking to explore the use of models such as SIBs. The government will also be “supporting” a programme of work to consider how it can harness the talent and energy of charities and social enterprises to achieve better public service outcomes.

It will also accelerate the growth of the SIB market by establishing an £80 million Life Chances Fund that will help to pay for interventions that tackle some of the most difficult and costly social challenges. In addition, £25 million will be committed to supporting SIBs focused on tackling homelessness, mental health and employment.

Importantly, for reasons already discussed above, government will push its own departments to look for new social investment in public services:

Over the next 12 months, we aim for at least two-thirds of central government departments to develop new models using social investment. We will create an open database of information, tools and resources for policy makers, setting out where and how social investment models can support policy issues.

This is a rather vague objective which appears to be working with “mission-led” businesses to put their social mission on a legal basis. This seems to be about making it easier for government to identify these businesses and also, presumably, to ensure that social investment opportunities are not abused by private companies.

Social Investment is an increasingly contentious issue. There are many benefits to finding other funding streams for public services — especially in the second decade of the 21st century. However, the details of different Social Impact Bonds vary considerably; while some clearly bring philanthropic money and the chance to experiment and innovate, others can turn out to be an expensive method of borrowing money.

It will be interesting to see further details of the government’s new centre of research and technical excellence and to see what issues they will be exploring so that we can base an assessment of social investment more on fact than on political rhetoric. 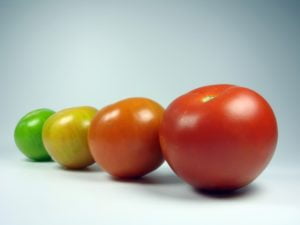 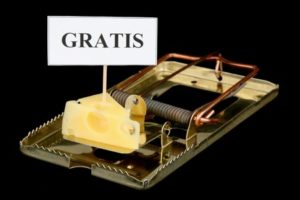 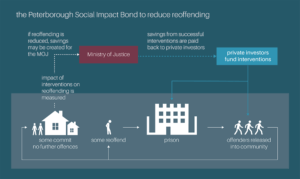