Click to Subscribe
Culture change only way to prevent prison suicides
Final report from Howard League & Centre for Mental Health says punitive culture must change if alarming rise in prison suicides is to be reversed.

Prisons need a profound culture change to prevent people from losing their lives through suicide, according to a report published last week (13 February 2017) by the Howard League for Penal Reform and the Centre for Mental Health.

Preventing suicides: staff perspectives, the last of four reports from an investigation into suicide in prisons by the two charities, finds that distress, self-harm and suicide attempts are too often seen as manipulative rather than signs of need and vulnerability among prisoners.

Staff shortages, a ‘toxic’ working environment and a failure to recognise the traumatising impact of prison for both prisoners and staff all contribute to an unsafe environment.

The report that the situation had worsened considerably with staffing shortages impacting on the safety of the prison; prisoners spending longer in their cells and less time meaningfully occupied in addition to the well-publicised problems of the high levels of the use of New Psychoactive Substances such as Spice.

The report is based on interviews with health care staff working in prisons and those reviewing clinical care following suicide deaths. Its publication follows the release of figures showing that 119 people lost their lives to suicide in English and Welsh prisons in 2016.

From punishment to wellbeing

The report finds that the majority of prisoners have multiple and complex needs including poor mental health, but many do not get access to mental health support because they do not meet the criteria for a referral. It concludes that prisons need to shift from a primarily punitive approach to a culture centred on wellbeing, recovery and rehabilitation.

The report sets out three vital steps to improve safety and wellbeing.

Every loss of life in prison is a tragedy for everyone involved. Our research shows that we need a new approach to suicide prevention in prisons by putting safety and wellbeing at the heart of our criminal justice system.

We need to bring about a culture change in prisons that puts safety top of the agenda, that understands the traumas both prisoners and staff too often live with, and that means people get the right help when they need it.

Making the changes set out in our report will save lives and enhance the rehabilitation of all prisoners.

Overcrowding and understaffing in prisons is placing intolerable stress on staff and prisoners, and putting lives at risk.

No one should be so desperate while in the care of the state that they take their own life. Staff who work in prisons should never feel so under pressure that they cannot stop and listen.

As prison suicides reach record levels, it is time for action. By taking bold but sensible steps to reduce the number of people in prison, we can save lives and prevent more people being swept away into deeper currents of crime and despair.

The mental health impact of therapy dogs in prisons 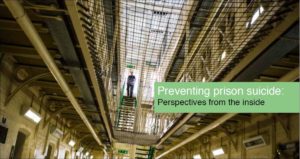