There has been endless media coverage on the use of social networks in the recent riots. A more considered debate is now emerging and the call for emergency powers to close down social media in times of unrest has been pretty much put to bed. However, there remains an abiding impression that looters used Facebook, Twitter and Blackberry Messaging to outflank the police, who were at a loss how to respond. However, many police services have been working on digital engagement for some time now and several actively used Twitter and other online approaches during the riots.

A number of police services are starting to use Twitter to communicate with their local communities and give a much clearer idea of the work that they do. In addition to the very well-publicised Greater Manchester Police Twitter Day, there are a number of other officers of all grades tweeting away on a day-to-day basis. Of course, when I say ‘a number’, many readers of an analytic bent are immediately thinking “how many”. Well at the time of writing: there are 556 ‘Twoppers’ – UK cops currently twittering . 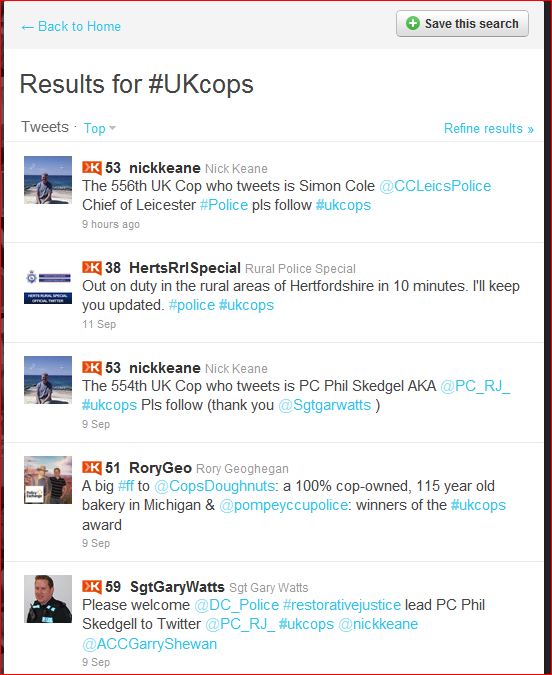 Indeed, so prevalent are twoppers, that the National Police Improvement Agency set up a competition to find the UK’s top cop on the microblogging site and 999socialmedia featured the top 10.

The winner was Portsmouth Police’s City Centre Unit (@pompeyccupolice) who do a great job of routinely tweeting what they are up to in terms of arrests, picking up truants, funny stories from the day, complaints about aching boots, interspersed with crime prevention and road safety advice often with links to useful videos etc. It’s like a cosy version of  “Police, Camera, Action!” which is both a lot more realistic and, somehow, more interesting – especially if you live locally and know the JD Sports where they just nicked a shoplifter. A number of other police officers and teams use a similar approach, talking about their daily work, making appeals for information, broadcasting information about major road problems, pending demonstrations etc. and promoting community meetings (for an online solution to engaging more members of the local community in deciding local police priorities see this post). The Birmingham police helicopter crew (@WMP_Helicopter) have 6,000+ following their daily exploits.

There has also been substantial coverage of how police services have used Facebook and Youtube as a way of collecting evidence to convict looters and also to make public appeals for information on suspects in the wake of the riots. What doesn’t seem to have made the news is the outstanding use of Twitter by some police officers during the riots themselves. Superintendent Mark Payne (@SuptPayneWMP) from Wolverhampton gives a terrific account on his blog of how he used Twitter to keep local residents informed, and tackle misinformation, on the nights of the riots themselves. Because he is a regular Tweeter, the information was picked up and relayed in real time by other individuals and organisations including the local authority. This is when Twitter really comes into its own – it can spread information much quicker than traditional TV or radio – increasingly broadcast media piggyback on social media with several of Mark’s tweets converted into banner headlines on live news shows.

A similar approach was undertaken by Sussex Police (information from Andrew Brightwell’s public-i Blog), where rumours about riots on London Road (seeded by coverage about London Road in Croydon) were quickly scotched by the police, who set up a live log on their website.

The lesson here is the obvious one. It takes time to develop a coherent digital engagement strategy and a considerable investment of time to get it working properly. Social media is all about interaction – a long way from just pushing out press releases and “Good News” stories to friendly local journalists, which is what “Communications” used to mean. The advantage of Twitter is that it is so quick to use in real time; one of the key reasons that Portsmouth and the other 555 twoppers have so many followers is that they integrate tweeting into their work and capture the moment. As I write this, the Portsmouth team are watching shoplifters in M&S on CCTV and waiting to arrest them. Six tweets over 15 minutes take us from the police being alerted to the problem to making an arrest. If you are the officer in the passenger seat for a ten minute journey, sending 2-3 Tweets doesn’t stop you doing any part of your job.

One key lesson from the riots that no-one seems to dispute is the need for better police-community relations. A key element of this is for local communities to haven a much better understanding of what their local police do on a day-to-day basis. Twoppers are perfectly placed to fulfill this role and digital engagement generally is likely to prove an increasingly important component in police communication and consultation strategies.

This is the first in a series of occasional blogs in which I will be looking at the use of social media in all parts of the criminal justice system – prison, probation, CPS, courts and defence lawyers. If you’d like to contribute your own post, please get in touch. 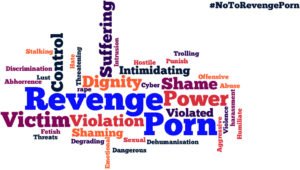