Politicians are supposed to implement policy. But you only have to look at the last two Justice Secretaries — Michael Gove and Chris Grayling, both from the same political party — to know that the person in charge tends to have a disproportionate influence on what actually happens.

With that in mind, I thought readers might be interested to get to know the new Justice Secretary, Liz Truss.

I have no aspirations or pretensions to be a political commentator so what follows is either factual or attributed to those with more knowledge and insight than me.

Elizabeth Mary “Liz” Truss was born in 1975, she was brought up in Yorkshire and read Philosophy, Politics and Economics at Merton College, Oxford University. Ms Truss joined the Conservatives in 1998, she  is married with two daughters, and lives in Downham Market and London.

She worked in the energy and telecommunications industry for ten years as a commercial manager and economics director and is a qualified management accountant. She went on to become Deputy Director at the think-tank Reform, where she advocated “more rigorous academic standards in schools, a greater focus on tackling serious and organised crime and urgent action to deal with Britain’s falling competitiveness.”

Liz Truss has been the Member of Parliament for South West Norfolk since the 2010 general election. From September 2012 to July 2014, she was Parliamentary Under-Secretary of State at the Department for Education before becoming Secretary of State for Environment, Food and Rural Affairs, the post she held until being appointed Justice Secretary on 14 July 2016. She holds no other paid jobs or directorships.

She is the first woman to become Lord Chancellor and Secretary of State for Justice (her formal title), the youngest since Judge Jeffreys and the third in a row to have no legal experience.

Here’s a short clip of Ms Truss entering Petty France for the first time on Thursday:

Video: Liz Truss arriving at her new office – the Ministry of Justice – after being appointed Justice Secretary. pic.twitter.com/M5sLYhGMSs

The they work for you website records that on the vast majority of issues Ms Truss votes the same way as other Conservative MPs, although she has consistently voted for removing hereditary peers from the House of Lords, while most Conservative MPs generally voted against.

She has never rebelled against the government in the current parliament and campaigned to remain in the EU. Her topics of interested are recorded as:

She has spoken in only 11 debates this year, well below the average for MPs.

Ms Truss was a member of the Justice Select Committee between March 2011 and November 2012, but it appears Ms Truss has only ever spoken about justice issues three times in parliament,one of which was strongly in favour of cutting the legal aid budget. In terms of her votes on Home Affairs she has:

According to respected journalist Mary Riddell:

Liz Truss has previously insisted that Tories would repeal the Human Rights Act. Not a promising start for Justice brief

Five years ago Truss co-authored a book called “After the Coalition: A Conservative Agenda for Britain“. This argued  the need to “reverse the tide of soft justice”, complaining that some judges have declined to jail criminals on human right grounds and that punishment in the justice system is too often a dirty word. Ms Truss and her colleagues were also “not ashamed to say that prisons should be tough, unpleasant and uncomfortable places”. They wanted persistent offenders sentenced for prolonged periods, praying in aid Howard League research on the ineffectiveness of short prison terms. They also proposed privatising all prisons.

We don’t yet know what sort of Justice Secretary Ms Truss will be — there’s (potentially) a big difference in writing a hard-hitting book when you’re first elected to parliament and what you do when you’re secretary of state, especially when prison reform was highlighted in the Queen’s speech two months ago.

That said, history would suggest that she will view the justice system more from Mr Grayling’s viewpoint than Mr Gove’s.

Update: 19 July 2016, responding to the Prison Chief Inspector’s annual report, Ms Truss was very clear that she would picking up Mr Gove’s mantle and continuing the prison reform programme at full speed (as reported by Alan Travis in the Guardian):

I want to see radical reform and I am under no illusions about the scale of the challenge we face or how long reform takes … I will set out the next steps for this agenda in coming weeks, but I am clear that the vital work of prison reform will continue at pace 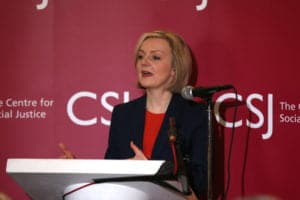