The first briefing examined the difficulties associated with being released from prison on a Friday while this briefing focuses on the issue of valid ID for released prisoners. A lack of valid ID – such as a driver’s licence or passport – in the weeks leading up to, during and after release from prison, is one of the biggest obstacles people face which has an impact on their chances of moving away from crime. Without valid ID, people leaving prison can face difficulties getting a job, receiving benefit payments as a vital source of initial income to survive, or securing a safe place to stay to avoid homelessness.

Whenever a job offer is received, pre-employment checks require proof of address and the right to work in the UK to be confirmed, which can be done with a passport or birth certificate. Without this ID, job opportunities can be lost or severely delayed. Similarly, presenting as homeless at a local authority or seeking urgent private rented accommodation on release requires proof of the right to live in the UK, which can be proved with a passport or birth certificate and residence card. Without this, securing urgent accommodation will also be difficult.

For many people leaving prison, being able to apply for an advance benefit payment such as Universal Credit is critical. This ensures that essential money is available upon release, but an application cannot be made without proving identity. Where delays in proving identity occur, people can be left with only a £46 discharge grant until the issue can be resolved. This can result in people falling back into familiar patterns of offending behaviour in order to survive.

“When there is a delay in getting benefits, even for a matter of days, clients are at risk of reoffending and returning to custody.”

Having a bank account is also critical for many people leaving prison in order to ensure that wages from jobs and Universal Credit payments can be received without delay. During 2017/18, Nacro opened around 650 bank accounts for service users leaving prison that urgently needed them. People that have difficulty showing a consistent address history, such as those on short prison sentences or those who have experienced periods of homelessness, often face problems when trying to set up bank accounts. Upon release, a lack of valid ID will be a further barrier to opening an account, leaving many facing periods of financial difficulty.

‘Martin’ was released from prison with an old passport that was ripped and damaged, which was fortunately accepted by DWP for his Universal Credit claim. However, the damaged passport was not accepted by any banks to enable a back account to be set up, and Martin had no money to pay for a replacement passport. He was out of custody for more than four weeks with no access to a Universal Credit payment. During this time, Nacro Resettlement Workers had to support Martin and provide money for clothes, food and travel. A credit union was finally found that would accept the damaged passport so that Martin could begin to access his Universal Credit payments.

Nacro believes that everyone leaving prison should have valid ID and is urging the government to take action by: 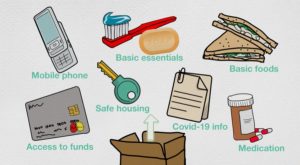 Nacro resettlement teams find that COVID-19 has brought them closer together and enabled them to create new partnerships and working practices.