Mark George is a Queen’s Counsel at Garden Court North Chambers, and specialises in civil liberties and human rights.

I didn’t really “get” Twitter for a while.  I had been commenting on legal issues and important legal decisions for a number of years and didn’t see what the point was of Twitter.

The marketing manager in my chambers suggested I gave it a go.

Now I am converted.

I tweet because it allows me to sound off about things that matter to me, namely criminal justice, government assaults on the rule of law, legal aid and access to justice and the death penalty in the USA which I am very involved with through the legal charity Amicus (follow on @Amicus_ALJ).

Tweeting also gives me the chance to publicise articles and blogs I have written and events I am involved with.

The best and worst things about tweeting

It’s a great way to keep up with what’s going on in the legal world and beyond.

It is a great resource because it puts you in touch with all manner of articles that you otherwise might never have seen.

The worst thing is that it can be addictive and if you are not careful you can end up spending hours tweeting and reading the attachments when you should be working.

It is also very easy to miss many tweets.

If, like me, you are working and not able to check tweets for several hours it is not easy to go back through hundreds of tweets, so I end up missing a lot of what people have said.

On the other hand the temporary nature of Twitter means that you can say the same thing as someone else said a couple of hours ago and it doesn’t matter as it is likely what you have said will be picked up by different people. 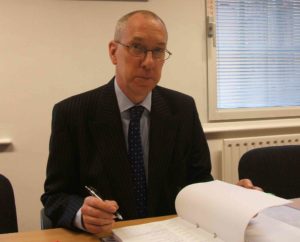 Think about your target audience and when they are likely to be reading their tweets.

Not much point tweeting if you audience are likely to be at work and unable to read their tweets.

When people are travelling is an obvious time for them to read their twitter feed.

As I am usually busy in court I tend to tweet first thing in the morning to catch people going to work and then late afternoon for the evening journey home.

Each October subject to my availability I do a series of talks to law students at universities in the north of England on the US death penalty and how they can get involved through an internship in the US.

Last October I picked up three new universities who invited me to talk because they had seen me on Twitter talking about similar events at other universities.

On the caution side, don’t hit the send key until you have taken a breath and are sure you have (a.) corrected any typos and (b.) not said something likely to get you into trouble.

Engaging with those who get really angry – they are best ignored.

This is the 42nd  post in the criminal justice/legal Why I tweet series. Read the others here.