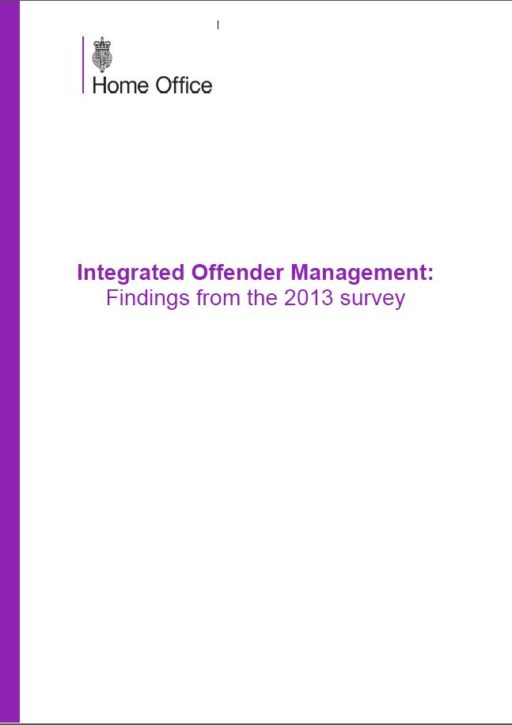 The Home Office published the findings of this year's Integrated Offender Management survey yesterday 26 September 2013. The document makes it clear that the survey and its date of publication are closely connected to Transforming Rehabilitation - the overhaul and outsourcing of the probation service. The Home Office asked all 292 Community Safety Partnerships in England Wales to complete the online survey which 184 CSPs (63%) did. This summary of the findings gives a quick overview...

The Home Office published the findings of this year’s Integrated Offender Management survey yesterday 26 September 2013. (There was a previous survey in 2011.)

The document makes it clear that the survey and its date of publication are closely connected to Transforming Rehabilitation – the overhaul and outsourcing of the probation service.

One of the main features of TR is the proposed change in the law to ensure that short term prisoners (those serving less than 12 months) receive statutory supervision and support.

Many of these short term prisoners will include the sort of prolific offenders (often drug using offenders) currently managed by local IOM schemes.

IOM schemes are multi-agency partnerships, almost always led by police and probation services, who provide enhanced support and supervision to prolific offenders in order to have a significant impact on local crime rates.

Many organisations who are competing to run the new Community Rehabilitation Companies – who will work with low and medium risk offenders under TR – are developing service delivery models which build on the success of IOM schemes (see this recent evaluation of the Sussex scheme).

All CRCs will need to reduce the reoffending rates of local prolific offenders in order to gain maximum revenue from their contracts via the proposed (but not yet finalised) payment by results model.

The Home Office asked all 292 Community Safety Partnerships in England Wales to complete the online survey which 184 CSPs (63%)  did.

This summary of the findings gives a quick overview of the spread and main characteristics of current IOM schemes.

The survey asked which agencies were involved in IOM schemes and I have produced my own chart of the findings below: 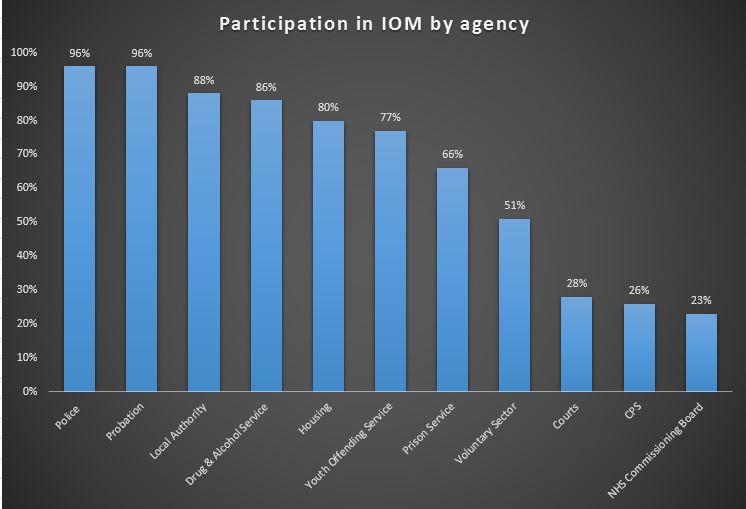 Co-location is seen as a critical success factor in IOM schemes and is heavily encouraged in the recent MoJ Transforming Rehabilitation Target Operating Model.

Probation and police IOM staff were co-located in just over half of areas (55%) with all four lead agencies (police, probation, Local Authority and Drug Service) sharing premises in 11% areas.

The size of CSPs varies considerably so it’s not surprising that the size of IOM schemes also varied.

The survey also asked which groups of offenders were targeted by IOM schemes.

The majority (89%) prioritise Prolific and other Priority Offenders – unsurprising, since most IOM schemes evolved out of PPO arrangements.

Other high priority offender types were:

These figures show that the biggest development in IOM, in addition to the continued roll-out and consolidation of the multi-agency approach, is that several areas are broadening their IOM caseload beyond acquisitive offenders.

It appears that most probation staff currently working in IOM schemes will be transferred to the shadow CRCs which probation staff will operate until contracts are awarded.

It seems certain that IOM will be central to the “new world” of probation likely to come into force in April 2015. 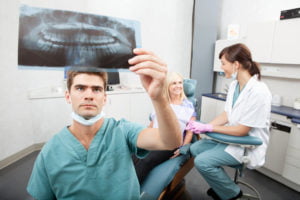