Subscribe
New research from Professor Gill Kirton examines the highly negative impact on a mainly female workforce of Transforming Rehabilitation, the privatisation of the probation service.

Employment Relations and Working Conditions in Probation after Transforming Rehabilitation

Staff compulsorily reassigned from the public sector probation service to the new private Community Rehabilitation Companies have found the move distressing and demoralising.

Newly published research found that staff were overworked, had less autonomy, little job security and had much fewer opportunities for professional training and progression.

Staff from both the National Probation Service and the CRCs found it difficult to adjust to a fractured workplace where they were encouraged to see themselves as working in separate organisations rather than in co-operation to rehabilitate offenders and keep the public safe.

The research was carried out by Gill Kirton and Cécile Guillaume from Queen Mary University of London and is based on a survey of 991 NAPO members plus a number of individual interviews and focus groups. Although completed in September, the report was only released into the public domain this week and was the source for an article by Tamsin Rutter in the Guardian.

The authors found, as most readers will know, that the vast majority of probation staff were against Transforming Rehabilitation and in particular the way the probation service was privatised:

The split was often described using highly emotive metaphors – ‘a train crash’, ‘a messy divorce’ – that conveyed the strength of feeling in opposition to TR. Similarly, referring to the aftermath of TR people frequently talked about ‘grieving’, ‘mourning’ and feeling ‘loss’.

The research found that staff were negative about most aspects of the TR process including the initial key decision about whether they were to be based in the new National Probation Service or the 21, soon-to-be-privatised Community Rehabilitation Companies.

Many staff felt that the process for allocating them was simplistic and unfair and while 87% of staff allocated to the NPS were happy with their assignment, only 52% of those assigned to CRCs were content.

The researchers asked staff about their perceptions of workplace culture and although a large majority of staff expressed dissatisfaction with their work environment post-TR, CRC staff were less content on almost every measure: 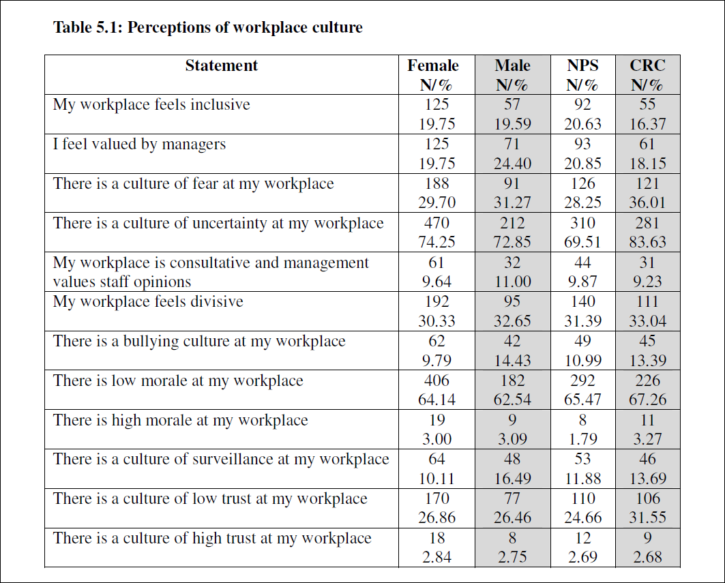 Large numbers of staff reported a very significant deterioration in their working conditions with bigger caseloads and the stress of being unable to get the job done within normal working hours: 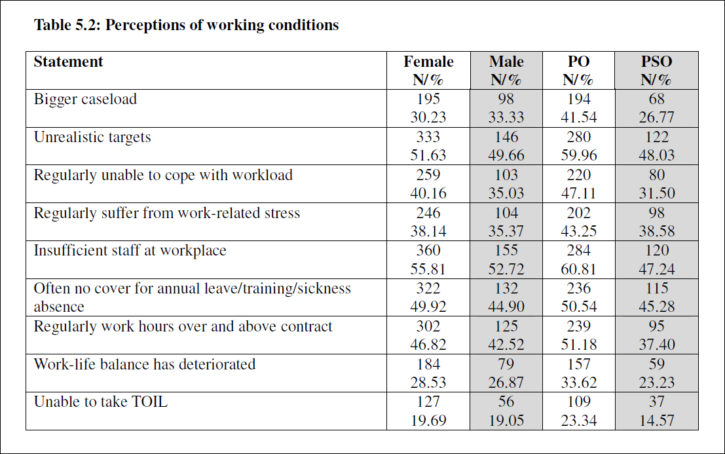 The authors  highlight  the impact of the changes on women in particular, who make up 70% of the probation workforce. They note that whereas the public sector has traditionally been seen as a good employer of women, providing skilled, relatively well-paid jobs with the chance of progression, TR has resulted in fewer opportunities for flexible or part-time working, and staff being relocated further from their families, often with little or no choice — apart from that of leaving the probation service where many had invested years in developing a range of highly specialist skills.