I am writing this post to celebrate the launch of the new @UTurntraining smartphone app which is dedicated to preventing deaths caused by opiate overdoses. The app was launched on 16 January 2012 and is available for download from the Android marketplace for the sum of £1.99.

The iPhone version is already under development.

Back in October, I wrote a post speculating on whether a smartphone app could be developed to tackle drug overdoses. My idea was based on the fact that people who overdose on heroin or other opiates often have drug using friends with them who are too scared to call 999 for fear of police involvement. I wondered whether an app could be developed which used a smartphone’s GPS capacity to dial emergency services and direct paramedics to the location of the overdosed person.

Within a couple of days, the harm reduction community had got in touch to let me know that UTurn Training had not only had a better version of the same idea but had invested a great deal of time, effort and money on developing just such an app. They tell the full story on their own website but were kind enough to keep me up-to-date on the process and send me a beta version of the app.

The app itself has three key sections:

Many people who download the app will be family members or friends of dependent heroin users who are fearful of finding their loved one overdosed. Section one does a great job in informing people about the main issues so that they know what causes opiate overdoses and what to do in the event: 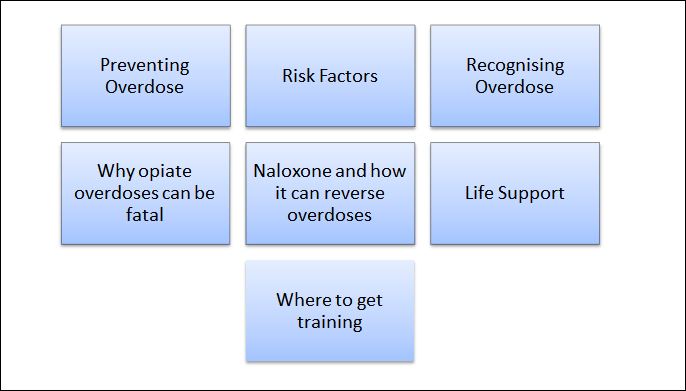 The emergency guide itself was painstakingly developed with the help of many harm reduction professionals (particularly @PatoHare1) and input from dozens of drug users. It uses simple step by step diagrams with voice guidance to talk people through getting help, administering naloxone if available and giving CPR. One of the challenges was to get the right voice that everyone could hear clearly, and which was reading out instructions at the right speed – not so fast that they couldn’t be followed, not so slow as to be distracting to someone in a state of fear and anxiety as they tried to save a life. The app developer @okodigital was critical in getting this process right. 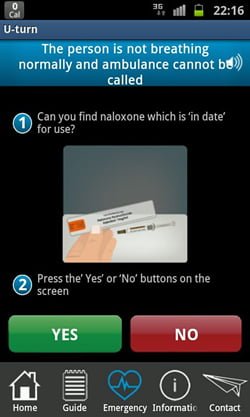 Throughout the whole development process, U-Turn Training kept consulting with opiate users and experts in the field. Their reviews have been encouraging with many pharmacies and drug treatment agencies saying that they thought the app would be an effective training tool for staff and drug users on how to manage overdoses.

The app is considered to have such potential that it has been entered for the Megas, the Guardian Digital Innovation Awards 2012 in the “Best Use of Technology for Social Change” category.

Even though I became aware of the development process late in the day, I do know how much work was required to ensure that the app was fit for purpose and functioned in critical overdose situations. Of course, all that hard work (and money) will be wasted if the app isn’t downloaded in its thousands and used as an awareness raising and training tool to help prevent opiate overdose fatalities and promote the use of naloxone.

So please, download the app and spread the word.

Naloxone saves lives but we need to improve its availability

ACMD finds naloxone prevents deaths by opioid overdose but says we need a national joined-up approach to promote its take-up.

How many people carry take-home naloxone?