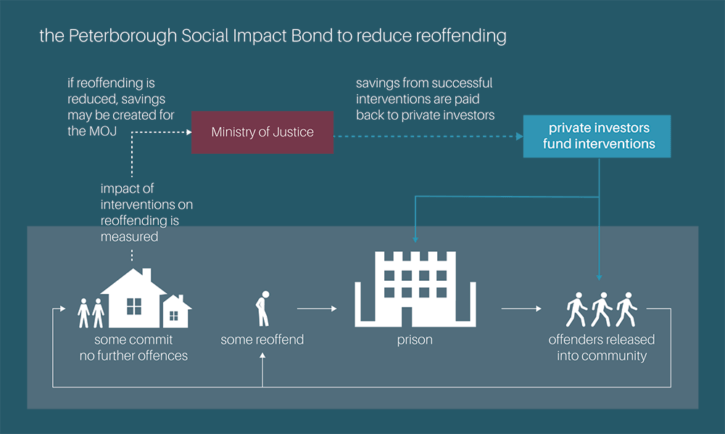 In the week before Christmas (17 December 2015) the MoJ published the final process evaluation of “The payment by results Social Impact Bond pilot at HMP Peterborough” undertaken by RAND Europe.

This pilot, known as the One Service, sought to reduce the reoffending of short term prisoners released from Peterborough prison by providing them with a range of co-ordinated advice and support services including, in particular, support from trained mentors. The pilot was operated by Social Finance funded via a Social Impact Bond (SIB) and operated by a partnership led by St Giles Trust. The target set for the Peterborough pilot was a reduction of 10% in the frequency of reconviction events in each cohort of around 1000 prisoners (calculated by comparison with a match group).

The pilot started in 2010 and was planned to run until 2017 but was discontinued early with the implementation of the government’s Transforming Rehabilitation project which split the probation service into two and made 21 new Community Rehabilitation Companies responsible for released prisoners, including those discharged from HMP Peterborough.

This is the process evaluation report which looks at the workings of the scheme, rather than measuring its impact. The final outcome results are expected to be published in summer 2016. You can see my summary of the latest set of results here. The evaluation was designed to address five key questions:

Interestingly, although released prisoners were eligible for support from the One Service for one year, most chose to end their contact after a few months. Commonly, there was intense period of contact following release, after which contact tapered off. Just one in five service users were still in contact after three months.

None of the stakeholders reported any major costs or disadvantages, the wider benefits consisted mainly from building on the networks developed in the course of the pilot. The most tangible benefit was that Peterborough prison developed an ‘Outside Links’ centre to provide support for all prisoners on the day of release.

The online case management database was accessible to workers from a range of agencies which was found to be very helpful in co-ordinating interventions.

Strengths and weaknesses of the SIB contract

The main strength of the SIB model, which was underpinned by philanthropic investors, was that voluntary sector providers were insulated from financial risk and could focus on service development.

The evaluation identified a number of key learning points:

It will be interesting to see how many of these learning points are taken on by the new Community Rehabilitation Companies as they seek to reduce the reoffending of short-term prisoners across England and Wales.