Don’t forget to cancel your milk, papers and Facebook updates

New technologies present new opportunities for law enforcement agencies to catch and prosecute criminals – from Smartphones that can report themselves stolen to the increasingly sophisticated police use of social media for gathering intelligence, investigating crimes and establishing evidence.

Of course, the same technologies present new opportunities for criminals too and the balance of power has shifted many times since the invention of fingerprints right up to DNA profiling and now, it would seem, the potential interception of all online communications.

Last year there was a well-publicised survey of 50 UK  burglars by a security firm which revealed that they made extensive use of social media and the Internet to target victims.

They claimed to target homes where Facebook posts revealed that the homeowners were on holiday.

They also claimed to make effective use of Google StreetView to undertake reconnaissance and try to spot access points, alarms etc.

Of course, on the side of the angels, @TheCustodySgt once told me he also uses StreetView to check out whether arrestees are giving their real address – being unable to describe your own front door is a bit of  a giveaway.

Hidden in the small print of the survey were the well-established features associated with break-ins such as open windows, easily visible valuables and keys hidden by doorways.

The survey led to a rash of  infographics from a number of security and insurance firms like the one shown below (for the record, I have no affiliation with this company and have not received any inducement to reproduce it here).

Although I have to admire their chutzpah in linking London’s burglary rate to the high proportion of Londoners using social media without any evidence to confirm the link.

Brought to you by Confused.com – Get cheap home insurance in minutes. 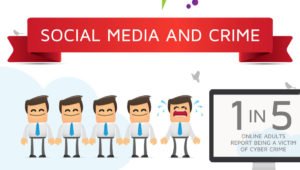 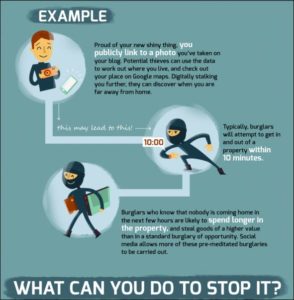