The latest MoJ reoffending stats (published on 30 April 2015) found that overall reoffending rates are pretty constant with the overall one year reoffending rate for all adult and juvenile offenders who were cautioned, convicted or released from custody between July 2012 and June 2013 identical to the previous year at 26.2%.

[Reoffending results always lag at least 21 months behind the period they cover to allow one year for any reoffending, an additional six months for the system to process any re-offences and then about 3-4 months for the data to be analysed and the report produced.]

However, the real interest in the set of figures can be found in Annex A of the report which presents the latest reconviction figures for the reoffending payment by results pilots from Peterborough and Doncaster prisons. These pilots have been high profile since their inception mainly because the Justice Secretary Chris Grayling talked them up constantly as an example of the changes he wanted to achieve through his radical overhaul/privatisation of the probation service, known as Transforming Rehabilitation.

The last set of results, published on 7 August 2014, found mixed results with both prisons exceeding their targets, but Doncaster only doing so by a small margin. This current set of results are much more disappointing.

The figures released in this MoJ bulletin relate to the second cohort of released prisoners and measure reconvictions within the six months after release (rather than the usual 12 months). The table below, taken from the report, shows that there was only a small reduction in the frequency of reoffending – an average of 84 reconviction events per 100 offenders in comparison to a national rate of 86 reconvictions. 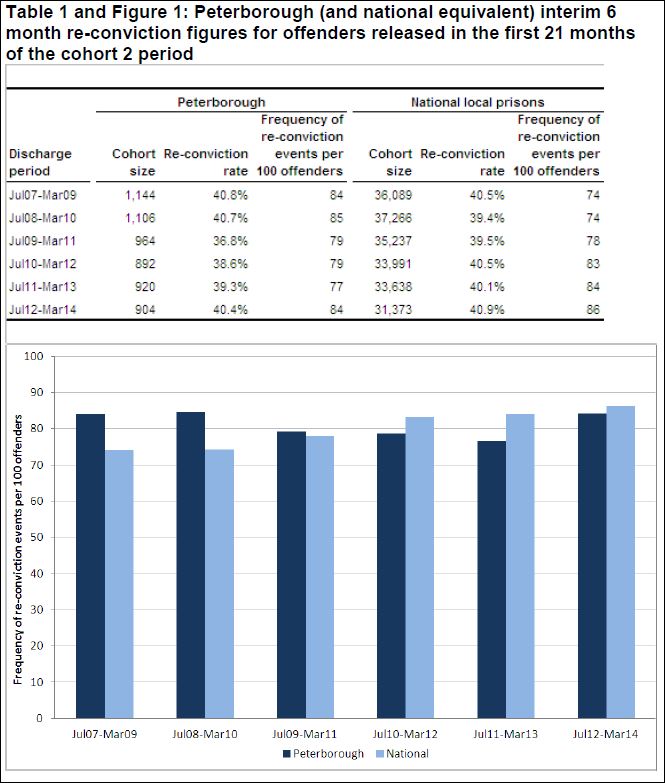 The HMP Doncaster model is run by Serco (who hold the contract for operating the prison) in a partnership with Catch 22 and Turning Point which dissolved in early 2014. The target for this pilot was a 5% reduction in the reconviction rate – a binary measure – Serco were required to achieve this target in order to retain the full operating value of their prison contract.

These latest figures show that the reconviction rate for prisoners released from Doncaster actually rose 2.8 percentage points against the previous year to a level that was higher than the national comparison; again the table below is taken directly from the report. 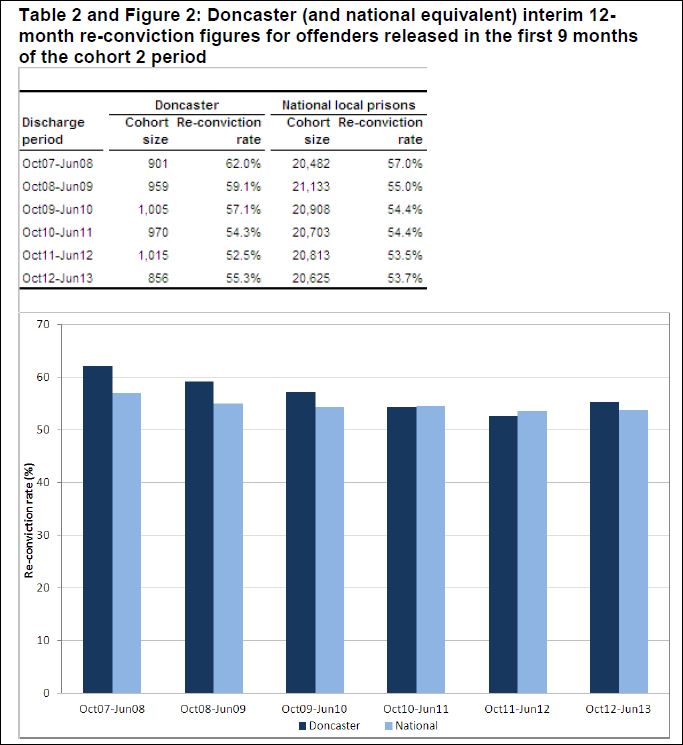 These are very disappointing results for the MoJ. Normally, there would be an expectation of a high level of performance from pilots with such public exposure where the partners had chosen to participate and, indeed, had championed and driven the initiative from the outset.

It is my experience from being involved in evaluating dozens of criminal justice pilot schemes that the main challenge is typically how to replicate this initial success in any national rollout.

Therefore, it is an extremely worrying sign for the new private providers of probation whose revenue will be, to an increasing extent, dependent on reducing reoffending rates, that these high-profile pilots are performing so poorly.

Why are women sentenced to short prison sentences?

The All Party Parliamentary Group on Women in the Penal System finds failed probation reforms have undermined magistrates’ confidence in community sentences.