Click to Subscribe
10 things from the last ever NOMS digest
The digest is a compendium of fascinating facts on prison & probation life: temporary release, accredited programmes and the 51 babies in prison last year.

Over the last couple of weeks, I’ve perused the last ever NOMS  annual report (the National Offender Management Service was replaced by Her Majesty’s Prisons and Probation Service on 1 April this year) and this year’s Ministry of Justice annual report and accounts for nuggets of information which otherwise might go under the radar.

Today it’s the turn of the last ever NOMS digest, published on 27 July 2017, to be exposed to the light of day.

Here are ten facts I found of interest:

1: Failures to return from release on temporary licence

In 2016/17 there were 267 temporary release failures, 42 of which (16%) were failures to return, resulting in prisoners being unlawfully at large. This is an increase of 65% in temporary release failure incidents when compared to 2015/16 and can be partly explained by the increased recording of ‘minor failures’ such as prisoners returning to the prison after the agreed time.

Failures to return increased by 75% from 24 incidents in 2015/16, but this is still the second lowest figure in the time series presented.

2: Highest number of prisoners released in error ever

3: One quarter of prisoners held in overcrowded conditions

7: Accredited programmes in the community plummet

Much of this fall is attributed to the growth of Rehabilitation Activity Requirements, the quality of which has been criticised by the Probation Inspectorate.

8: 51 babies were in prison last year

There are currently five Mother and Baby Units in operation across the women’s prison estate in England and Wales which provide an overall total capacity of 52 places for mothers. However, there are a total of 57 places for babies to allow for twins. 61 women and 51 babies were received into a MBU in the 2016/17 financial year. This compares with 64 women and 57 babies in 2015/16 and is a continuation of the fall seen since 2010/11. There were 38 mothers and 40 babies in a MBU at the end of the financial year 2016/17.

At 31 March 2017, the total number of subjects actively monitored with an Electronic Monitoring device was 11,493, a fall of 9% compared to the same point in the previous year, continuing a downward trend which is linked to a decrease in the court caseload (court ordered tagging — as a bail condition and sentence — make up 76% of the total tagging caseload). The number of offenders subject to tagging on release from prison has increased.

Bail Accommodation and Support Services (BASS) provide accommodation to offenders from courts, offenders from custody and Home Detention Curfew requirement offenders. These offenders are placed in BASS-owned properties when they do not have a permanent place to live. In the financial year 2016/17, there was 1,957 referrals, an increase of 11% on the 1,770 made in 2015/16. 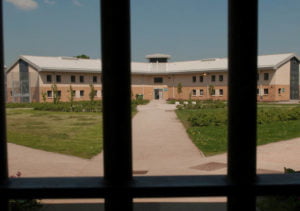 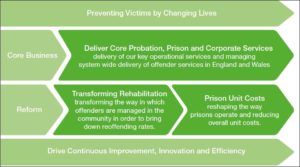 National Offender Management Service has published its annual report and accounts for 2014/15. What does it tell us?